ASUS's upcoming Intel Z68 based motherboard has been unveiled. The board is a part of the company's "ROG" line of motherboards which feature top of the line features for hardware enthusiasts and overclockers. The new motherboard being a part of the P8Z68 series is called "ROG Maximus IV Gene-Z" and will feature Intel's upcoming Sandy Bridge-E Processors which we detailed a while ago here.

The Micro-ATX sized board comes with a handful of features along with top of the line overclocking headroom. The Sandy Bridge-E Chip will be connected with 4 DDR3 DIMM Slots and features new technologies such as LucidLogix Virtu ™ graphics virtualization engine, and the Intel ® Quick Sync Video to achieve a faster video conversion along with Intel's SRT (Smart Response Technology).

The board includes 2 PCI-e X 16 slots with support for SLI and Crossfire GPU's along with a single Mini PCI-e Slot. As you can see the Heatsink layout is similar to the one's we have being seeing in the previous ROG based boards with a Heatsink with ROG eye logo covering the Z68 chipset while two huge heatsinks covering the Power Phase on the board. Asus has included Power and Reset switches on the board for overclocking friendly environment.

The board includes 4 USB 3.0 ports (2 Internal and 2 on backside) and a total of 10 USB 2.0 ports (4 Internal and 6 External), Other connectivity ports include E-Sata, Gigabit Ethernet, SPDIF connector, I/O connector, Audio port, Firewire and a Clear Cmos Switch. 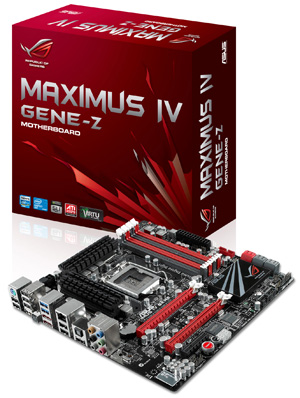 Asus didn't detail the availability or pricing of the board.