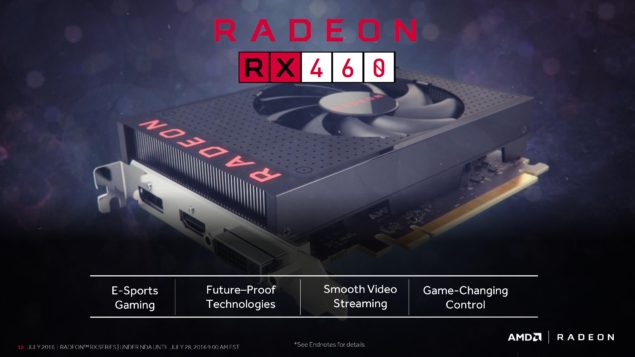 With AMD’s RX 460 details widely available to the public, manufacturers like ASUS have started to produce their non-reference variants, and the one that we will be debriefing you guys on is the ASUS STRIX RX 460. Here are all the details that you wished to know.

Detailed slides taken from VideoCardz show massive comparison details between the ASUS STRIX RX 460 and the reference version of the GPU. ASUS has stated that the superior cooling tech used by the company will allow the GPU to run 30 percent cooler than the reference version, which will naturally give tweakers some overclocking headroom when they want to obtain more frames from upcoming video game titles. Unfortunately, the company has also mentioned that the superior cooling of the GPU will only be displayed under a given set of conditions, which at this point, is ambient temperature of 25 degrees Celsius.

According to the performance stats, there are a total of two benchmarks given; one synthetic and one gaming benchmark highlighting two graphically intensive titles. The non-reference version of RX 460 obtained a 38 percent performance gain in both DOOM and Hitman. With the reference version unable to hit the 30FPS barrier, it was the ASUS STRIX RX 460 that will provide the sweet spot for gamers at the 1440p resolution, but we’re more inclined to say that the 1080p resolution would offer the most fluid gameplay sessions for gamers on a very tight budget.

As you can tell by these numbers, the RX 460 isn’t going to be blowing anyone away. It features less than half the Stream Processors of the RX 470 at a count 896 chugging along at 1090/1200MHz (base/boost), the RX 460 cranks out 2.2TFLOPS of Peak Compute Performance. While the memory configuration starts at 2GB of GDDR5, AMD’s manufacturing partners will definitely increase that memory. The card itself is running at 7Gbps on a 128bit bus resulting in memory bandwidth of 112GB/s.

The efficiency of AMD RX 460 allow it to consume All of these changes result in the RX 460 being able to feature a TDP of 75W, but we still that more non-reference versions are going to be released in the near future sporting a 6-pin power connector, so we’ll update you on more of these GPUs as soon as we come across them.