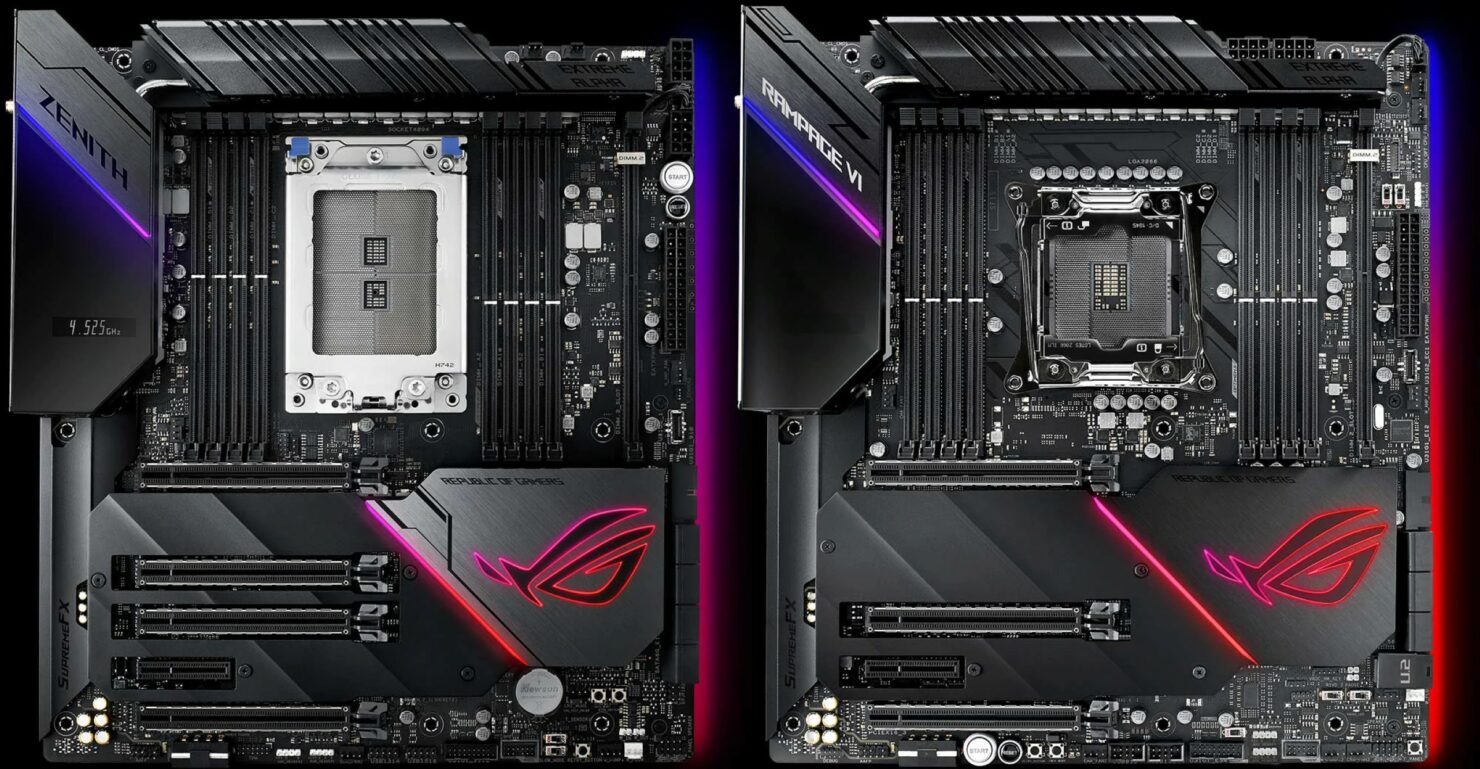 Remember when ASUS introduced their ROG cooling kit for existing HEDT motherboards, well these new boards are basically using a better version of those along with updated design and power delivery. ASUS never actually introduced a new HEDT motherboard in the ROG lineup since their original X399 and X299 ROG offerings but this time, ASUS is simultaneously launching boards for both Intel and AMD HEDT platforms. ASUS also mentions that they are trying to retain feature set parity across both boards which is something interesting to see since both boards are geared towards completely different platforms.

Some key points and the specifications sheet for both motherboards are provided below:

Let's start off with the ROG Zenith Extreme Alpha which is very similar in design to the original Zenith Extreme but is still an updated version in a lot of ways. The TR4 socket is still in the middle, supporting all AMD Ryzen Threadripper processors. There are eight DIMM slots surrounding it that can support up to 128 GB of memory with speeds of up to 3600 MHz+.

the motherboard is powered by dual 8 pin connectors and a single 24 pin ATX connector. ASUS has deployed an 8 Phase VRM with 16 power stages. The components include premium chokes, Capps, MOSFETs, and the IR3555 PowIRStage ICs delivering the best stability and overclocking potential for this tier of a motherboard. 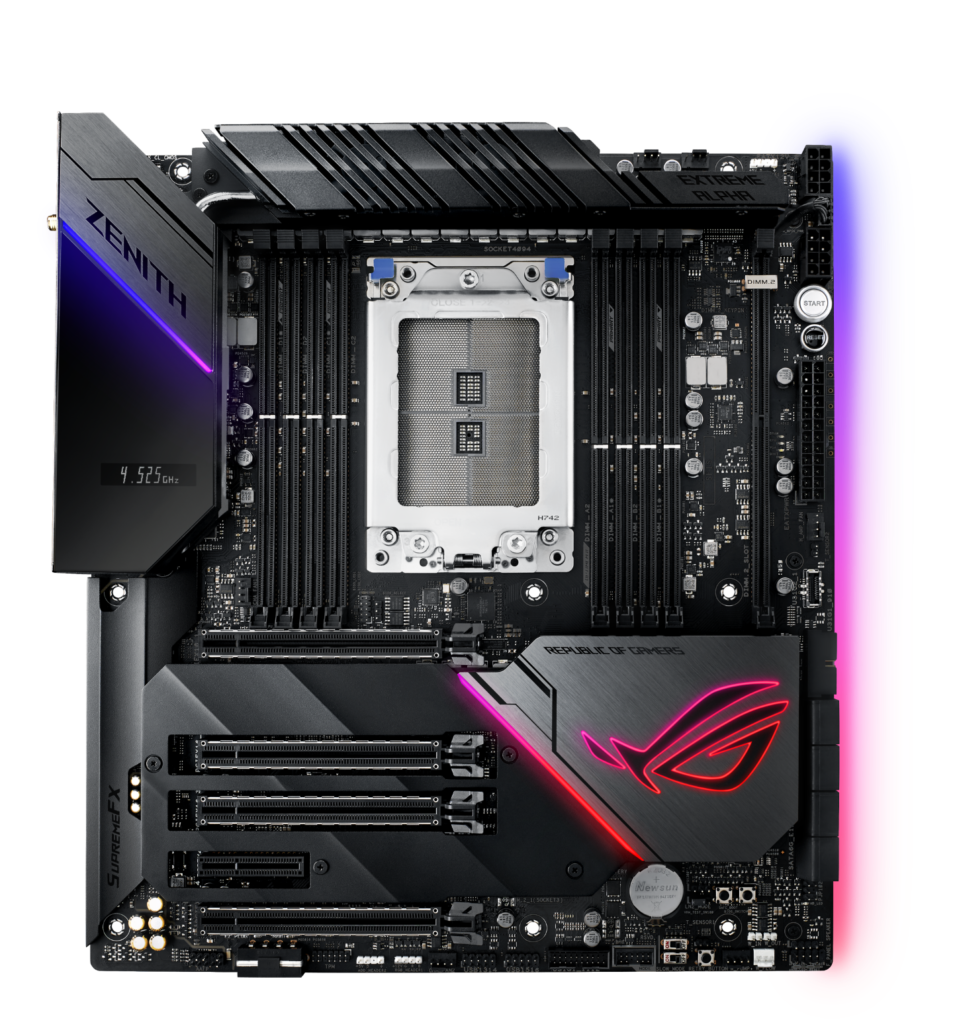 The cooling design gets an upgrade through the use of a much larger VRM heatsink with an extended coverage area and a direct touch heat pipe that delivers increased heat dissipation. The board makes use of active fan cooling with two of them hidden behind a heatsink shroud over the VRMs. The rest of the motherboard is similar to the previous Zenith Extreme featuring four PCI-e 3.0 x16 (x16/x8/x16/x8), a single PCI-e 3.0 x4, and dual M.2 slots. All M.2 slots are shrouded by the metal heatsink while a DIMM.2 slot offers even more expandability options.

The PCH heatsink shroud has RGB LEDs and made from anodized aluminum which looks amazing. The I/O cover has the ROG Live Dash screen which displays different readings from the CPU such as clock speed, temps and the current voltage.

The ASUS ROG Rampage VI Extreme Omega is very similar to the Zenith Extreme Alpha but rocks the LGA 2066 socket to support Intel's Core-X 7000 and Core-X 9000 series processors. It comes with dual 8 pin connectors that power the socket while the 24-pin ATX connector powers the board. There are eight DDR4 DIMM slots which can support up to 128 GB of memory with speeds of up to 4266 MHz+.

In terms of power delivery, we get the same 8 Phase (16 power stages) VRM as the Zenith Extreme Alpha which is cooled by the stunning heatsink with active cooling technology. The Live Dash LED along with the ROG PCH heatsink and bottom LEDs provide a good showcase for the motherboard. 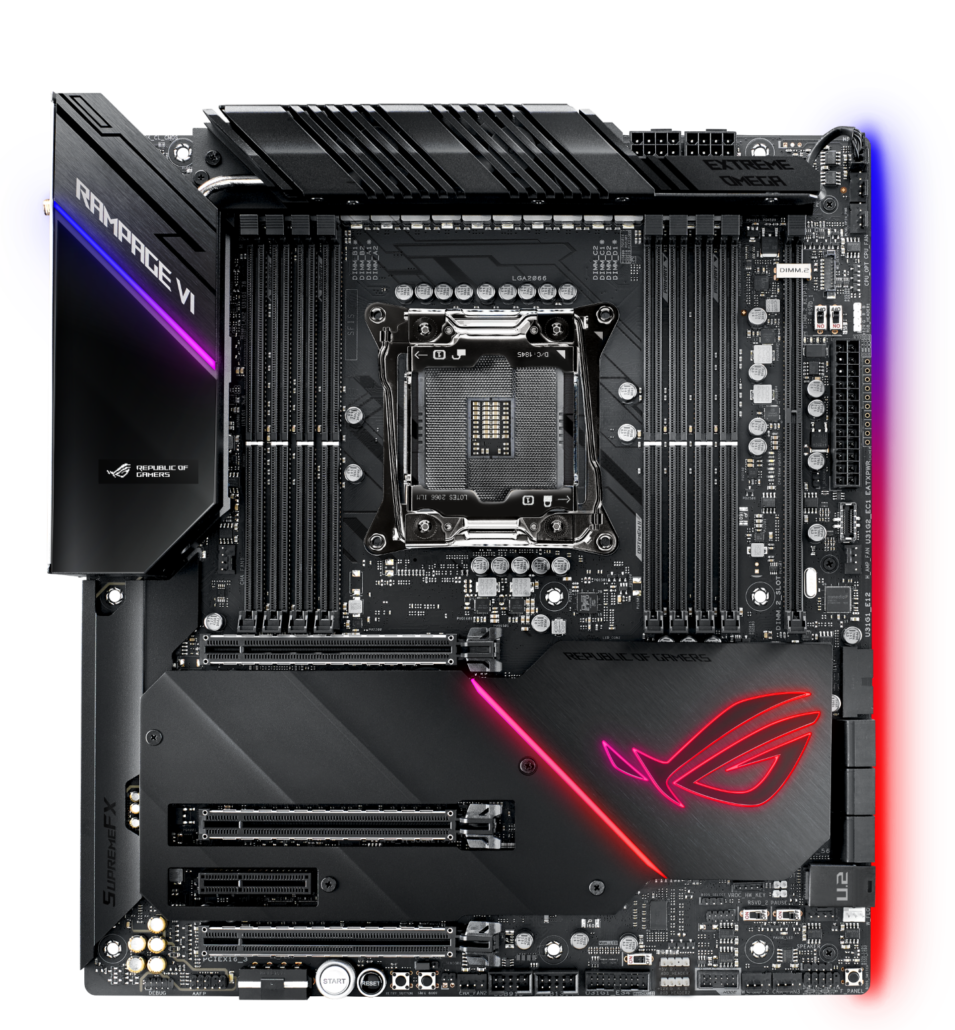 The motherboard has 3 PCI-e 3.0 x16 (x16/x8/x8), a single PCI-e 3.0 x4 and dual M.2 slots. The DIMM.2 port allows for even more M.2 SSD support. The board gives you the option to switch about one of the M.2 slots in favor of a U.2 port which is adjacent to the 6 SATA III ports. Both motherboards come with Aquantia 10Gb Ethernet LAN and offer a handful of connectivity options.

Prices for both motherboards are not mentioned yet but expect them to hit retail availability this month. We will update you with more information as soon as we get it.