AMD's Radeon R9 380X has finally leaked, ahead of its launch later this week. The upcoming graphics card from AMD which will feature their new Antigua XT GPU core has long been rumored to be arriving to consumers and now we finally get a first look at the card which will be aiming the mainstream market at a price of around $249 US and GCN improvements such as DirectX 12 support, Color Compression and Asynchronous compute capable graphics architecture. 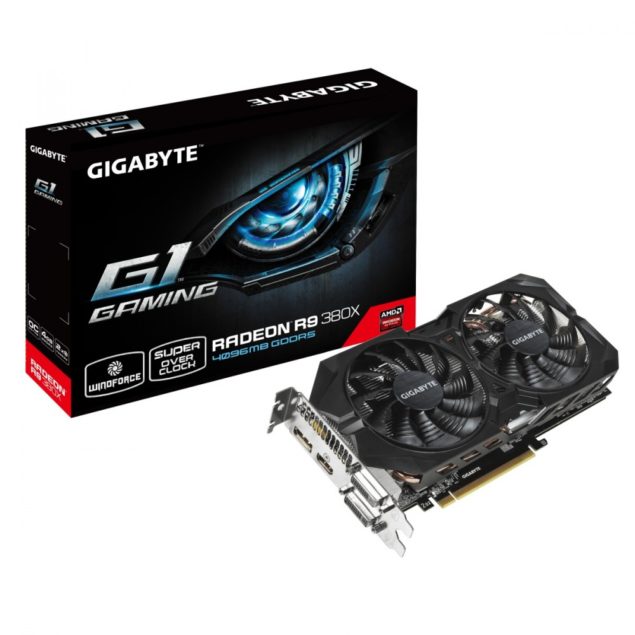 The Radeon R9 380X graphics card has long been awaited as a card that promises decent performance at a decent price. With NVIDIA having no graphics option right now in the $249 US market, it seems like AMD is taking the advantage and finally launching the Radeon R9 380X which is based on a full blown Tonga GPU core and comes with all the enhancements featured on the Fiji graphics chip (except HBM). The Radeon R9 380X is actually launching at the same price for once which the Radeon R9 285 was announced. Back in September 2015, the Radeon R9 285 was announced for $249 US and was the first graphics card to feature the Tonga GPU core. The $249 market is always seen by AMD and NVIDIA as the sweet spot for mainstream gamers but has not been touched again for a while.

The Gigabyte, XFX and ASUS cards that have been leaked include the Gigabyte Radeon R9 380X WindForce 2X , XFX Radeon R9 380X OC Double Dissipation and the ASUS Radeon R9 380X STRIX Gaming OC. All cards are powered by dual 6-Pin connectors and are clocked at 980 MHz, the faster overclocked variants such as the Sapphire Radeon R9 380X Nitro will have a 8+6 Pin power configuration and will be clocked at 1000 MHz. The reference boost clock for the card is set at 1000 MHz but that can be increased with factory overclocked options. The card has a standard compute performance of 4.00 TFLOPs (FP32) and 0.25 TFLOPs (FP64). The GPU is still based on the 28nm process but AMD did mention that the 300 series GPUs feature improved power efficiency and thermal management compared to the 200 series cores.

The Radeon R9 380X with the Antigua XT GPU packs 2048 stream processors, 128 texture mapping units and 32 raster operation units. We don’t have any specifics in regards to the core or memory clock speeds but it is now confirmed that the card will rock a 256-bit bus interface and feature 4 GB of GDDR5 VRAM as opposed to the larger 384-bit bus interface which the GPU allegedly sports but is not being fully utilized. Display outputs on the  card will include Dual-Link DVI, HDMI 1.4 and a Display Port 1.2 output.

The card is based on the latest GCN 1.2 iteration which is the same as the Fiji graphics core. It is fully compliant with features like Color Compression, Vulkan API support and DirectX 12 API support. The card packs 8 ACE units (Asynchronous Compute Engines) which allows tasks to be submitted and processed by shader units inside GPUs simultaneous and asynchronously in a multi-threaded fashion. Furthermore, the card comes with the latest XDMA CrossFire technology that allows multi-GPU functionality between one or more cards of the same kind effectively.

AMD’s Radeon R9 380X will be the full Tonga chip finally coming to the desktop market since the Tonga XT chip is currently only found on the Apple iMac and desktop users only received the Tonga Pro chip in return. Antigua XT will have a TDP of 190W. The similar chip make will allow several AIBs to offer custom designs at launch since the same custom PCBs used for the Radeon R9 380 can be configured for the Antigua XT chip. The Radeon R9 380X will definitely be a good option for users as it launches near at a price of $249 US since NVIDIA doesn’t have a competitor in that range and they might be forced to launch one if AMD manages to grab a decent share from the market. We will be looking at the Antigua XT chip this week as it launches in the global market.