In the past few days, we have managed to learn more about the next entry in the Assassin’s Creed series, which is apparently going to be named Assassin’s Creed Origins. Today, we are finally able to check out the game's first screenshots.

The leaked Assassin’s Creed Origins, which can be checked out right below, shows the playable character on a boat, confirming that naval gameplay features will be back. The text found in the image, "Assassinate the Crocodile" - "Follow Shadya to Khenut's villa" also confirms the ancient Egypt setting, as Khenut was a Queen of Egypt. 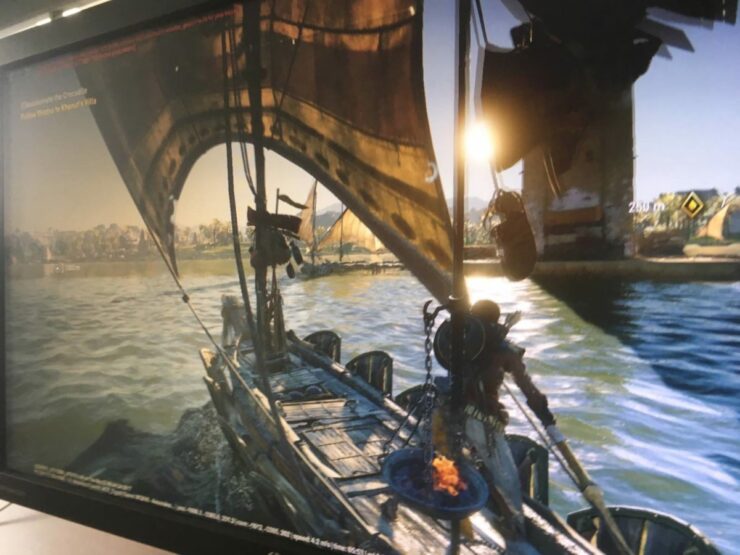 Unlike another screenshot that surfaced online some time ago, this new one seems to be real. Eurogamer reported a few minutes ago that three separate sources confirmed it's real.

Assassin's Creed Origins will be the biggest game in the series, with a much bigger scope than its predecessors.

The game will apparently grant the player considerably more freedom, featuring a greater emphasis on exploration over previous entries in the series. One source tells us that this is the biggest Assassin’s Creed the company has ever created and is “huge” in scope. They say that it has been in development for “at least” several years now. Hopefully, it will benefit from this extended development cycle.

Not only is Origins rumoured to boast an explorable ancient Egypt, players will also apparently be able to go beyond it – possibly even as far as Greece. We were told that boats will return in the game, allowing the player to sail the Mediterranean. Naval combat, naturally, is also said to be included.

Assassin's Creed Origins launches on a yet to be confirmed date. We will keep you updated on the game as soon as more comes in on it, so stay tuned for all the latest news.