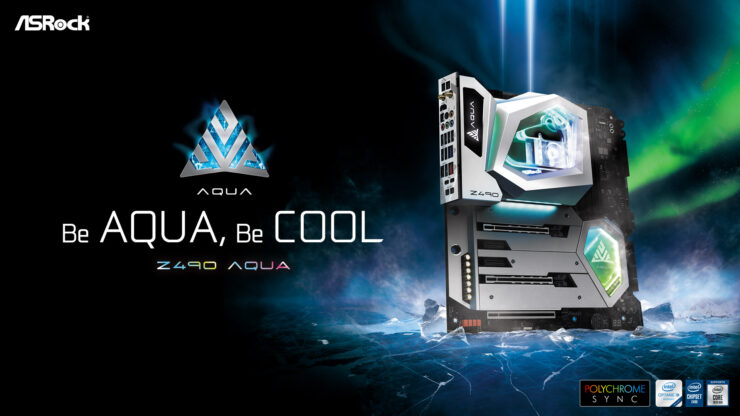 ASRock proudly announces its latest flagship motherboard, the Z490 AQUA to the delight of gamers and power-hungry users alike. And to highlight our launch we are limiting the Z490 AQUA to only 999 units making it extremely valuable. Using the latest 16 Phase 90A Dr.MOS & 2oz Copper PCBs, it delivers up to 95% VRM efficiency. To keep VRM's and 10-core processors cool even during sustained heavy loads or even overclocking, the Z490 AQUA features an advanced water cooling system that decreases the heat on the CPU VRMs to reduce VRM temps dramatically.

ASRock Unveils Its Flagship Z490 Motherboard: Z490 AQUA - Comes with an OLED Display To Keep You Informed On Your Motherboards Condition

Decked in a matte black undershell, the Z490 complements what young gamers want in a machine these days, simple, refined edges encased with a metallic armor that highlights the vibrant, techno LED lighting which screams I'm a water cooling aficionado and a PC mod enthusiast.

"Be Aqua, Be Cool" highlights ASRock's determination to be the frontrunner in water-cooled gaming motherboard manufacturers, and the PCIe 4.0 ready means it's prepped and the hardware is ready with PCI-Express Gen-4 support. By uniquely adding an external base clock generator, PCIe 4.0 components such as extra slots, and an M.2 socket we're assured the motherboard is ready to accommodate the next generation of CPUs.

Onboard ESS9218 DAC delivers true HiFi audio without distortion to give crystal clear audio quality, and with the 112dB THD+N, there is support for higher impedance for up to 600ohm using headphones. Practical WIMA audio caps optimize the sound when working on high-end audio applications to satisfy even the pickiest audiophiles. The Nahimic Audio experience gives vibrant and rich quality whether you are using USB, Wi-Fi, analog, or HDMI outputs, and through the active dashboard interface users can tweak surround sound, voice, bass, and treble to their listening preferences.

Whatever the build requirements, the ASRock flagship Z490 AQUA sets the pace with strong, industrial server-grade low loss PCB motherboard firmness to hold the water cooling blocks which can dissipate heat from the CPU and VRM efficiently. And, something unique to all 999 purchasers, is a set of water cooling fittings which includes hard tube piping widely used by water cooling fanatics. It is the perfect kit to build the ultimate water-cooled rig with extreme performance. You can also check out other ASRock Z490 motherboard in our full roundup here!