ASRock has finally unveiled the first Fatal1ty-branded product on the AMD platform that too is a premium motherboard based on the AMD 990FX chipset. Coming with the black socket, that tells use for one thing that is ready for the upcoming AMD FX series processors in the AM3+ package. The board is decorated with the famous Fatal1ty color scheme of black and red. The AM3+ socket is powered by a 14-phase digital PWM power designthat can even handle upto 140W chips with ease. 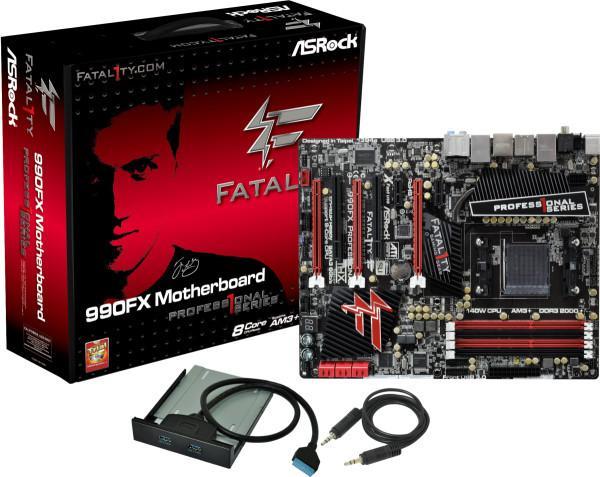 Along with that comes 4 DDR3 memory slots that can clock your rams up to speeds of 2000 MHz. 3 e xpansion slots that include three PCI-Express x16, of which two are PCI-Express 2.0 x16 wired to the 990FX northbridge, while the third one is electrical PCI-Express 2.0 x4 wired to the SB950 southbridge. The board natively supports both AMD CrossFireX and NVIDIA SLi technology. Other than that the board comes with six SATA 6 Gb/s with RAID support as well as two eSATA 6 Gb/s. Also, there are a total of six USB 3.0 ports of which two on the rear panel and four by the headers. Also bundled in the package is a front 3.5 Inch tray for USB 3.0 ports that can be connected to the board and also the tray doubles as an SSD mount.

The board does come with a bundle of features that is quite easily comparable with Asus’s Republic of Gamers motherboards. As for now, no word has been given on pricing or as such.