ASRock has revealed its new motherboards line up featuring the new USB 3.0 and a good news is that all the boards will come with a free USB 3.0 panel along side the I/O Panel which will further provide two more USB 3.0 connectors on your front panel. The USB 3.0 front panel not only aims to provide faster data transfer speeds but also ease of use without the need to plug the USB to the scattered back of your PC.

“USB 3.0 is finding its way into mainstream market. At ASRock, we have made it our goal to be the leading USB 3.0 motherboard brand, and we’re pleased to announce the innovative Front USB 3.0 Motherboard Series. ” commented by James Lee, V.P. ASRock Marketing and Sales. “The idea concept of ASRock Front USB 3.0 motherboards focus on a more user-friendly design for users. As today’s users generate more hungry-bandwidth demand and higher transmission speed for a faster PC, we see great value and importance in Front USB 3.0 in driving the performance of SuperSpeed USB 3.0 to reach its full potential.”

Since the arrival of USB 3.0, All motherboard manufacturers have released new motherboards equipped with the new port and so has ASRock, But the Front panel is something which only ASRock offers. Also the X58 Extreme 6 Chipset based motherboard from ASRock will feature up to 6 x USB 3.0 ports onboard (2 x Front + 4 x Back). You can check out the specs of the motherboards along with pictures below: 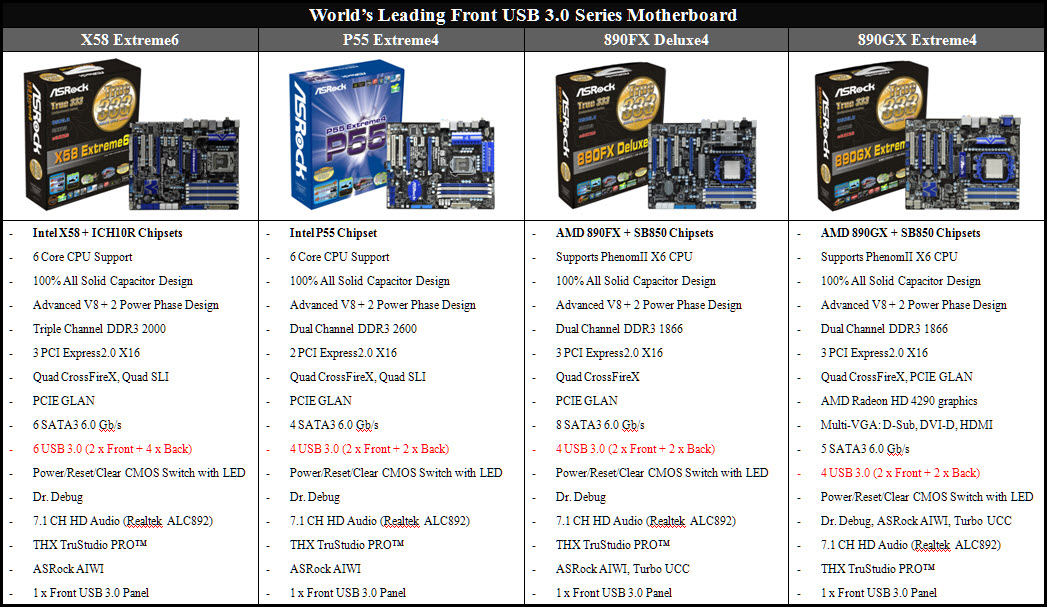 Specs wise all the moterboards seem real impressive and 6 core cpu support option and other overclocking features make them a great buy for PC Hardware Enthusiasts.