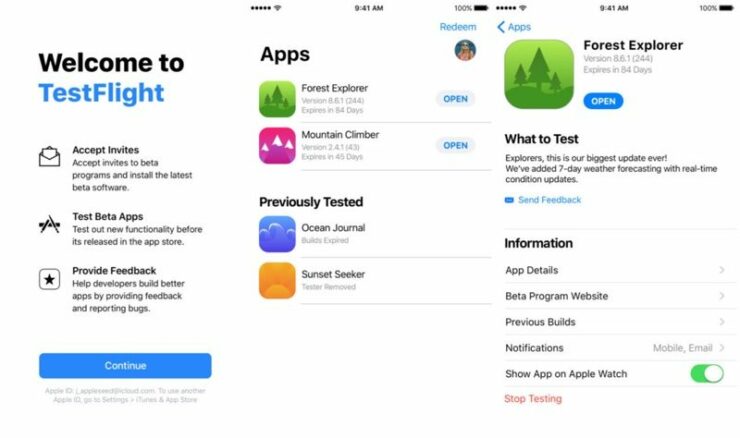 TestFlight is a service designed by Apple that allows users to install and test beta test apps ahead of release. Developers signed up with this service so that applications could be distributed to both internal and external testers. These testers would then be able to send feedback about the applications to the developer. At first the service was created for both Android and iOS, but since 2014 it only exists for iOS.

Using this service, testers can test up to a 100 apps at a time, both internally and externally. The testers can be grouped and the application notifies each group about the new builds that are available, what features should be focused on and also helps in sending feedback.

Focal.Bio Pro Subscription Is Up For Amazing Discounts For The Next Two Days – Avail Now

TestFlight just got updated to version 2.0.0 and it now comes with an overhauled user interface that has been redesigned for iOS 11. The new updated version of the app now carries IOS 11 style features and design like bold headlines, increased white space, app pages that resemble the App Store app pages and clear sections for apps that are being tested and the apps that have been previously tested.

The tech giant has also introduced a new welcome screen. This screen appears when the TestFlight app is opened for the first time after updating. Now it also features a 3D Touch option that redeems a code or updates all TestFlight apps from the Home screen. This is no doubt a great new addition to iOS 11. If you are an iPad user, you will observe that Apple has added support for Split View Multitasking while using the app.

Apple has not only changed the app design; it has also brought forward a much simpler app icon. The app icon is now simply a box surrounding the TestFlight propeller.
What are your views on the new updates?