As noted in Sensor Tower's report, spending on app purchases, in-app purchases, and subscriptions grew by 31 percent, year-over-year, for the App Store, while Google Play experienced higher growth, at 33.8 percent. Even during the pandemic, app marketplaces have seemingly been unaffected.

Consumer spending on in-app purchases, subscriptions, and premium apps climbed by 31 percent to $19 billion globally on Apple’s App Store in 3Q20, up from $14.5 billion in the same period last year. Spending on Google Play experienced even more substantial growth, increasing 33.8 percent Y/Y to $10.3 billion from $7.7 billion in the year-ago quarter. The split in spending between the two platforms remained consistent when compared to 3Q19, with Apple’s marketplace seeing nearly twice the revenue earned on Google’s store. 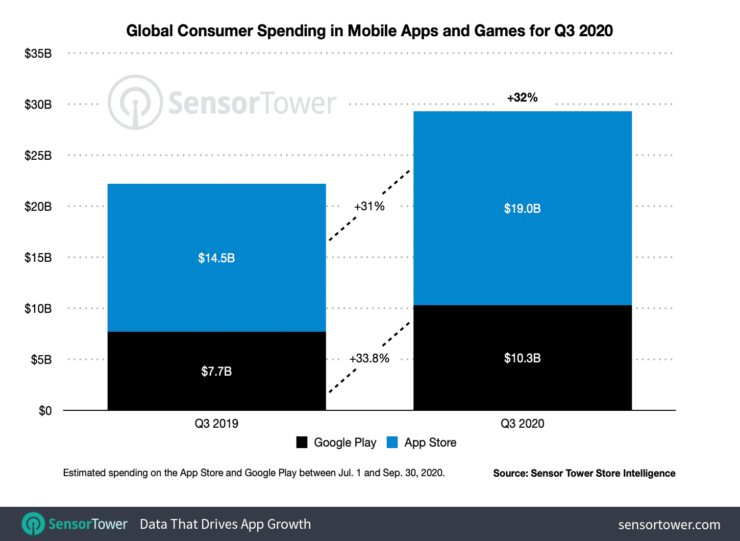 When it comes to the most popular apps by revenue, TikTok topped the charts across both stores, following by YouTube, which saw a 59 percent increase in year-over-year revenue. This could be attributed to YouTube's roll-out of Music and Premium in more locations across the world. New entrant Disney+ also made the top 10 list for revenue generation. 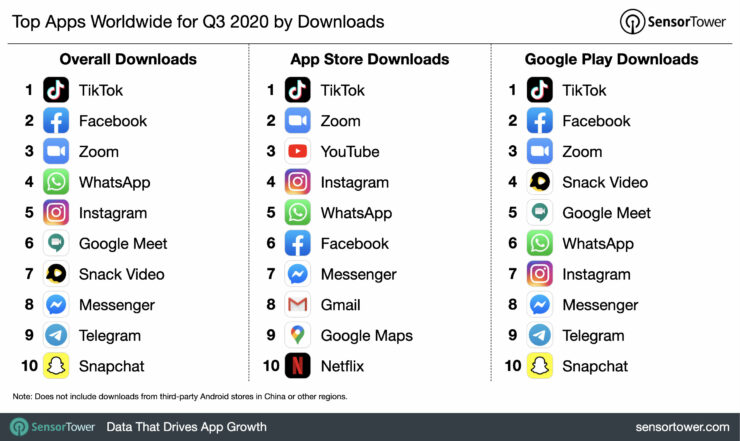 TikTok was also the top downloaded app across both stores, with Facebook, Zoom, WhatsApp and Instagram following closely. Out of the top 10 apps, 4 are owned by Facebook, 2 of which it had acquired. Zoom's spot in the top 10 list is due to its increased usage for work and leisure during the pandemic. 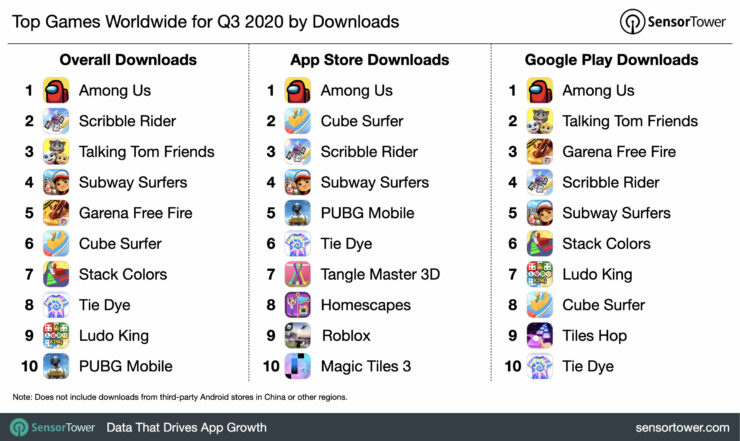 During a time when people are working and studying from home, gaming revenue for the App Store grew to $12.4 billion while Google Play Store saw $8.5 billion in spending.

In terms of top games by revenue, the top spot is held by Honor of Kings, also known as Arena of Valor internationally. The second position was held by PUBG Mobile, while Pokemon Go was at number 3. Roblox, another popular game, was at number 4. Candy Crush Saga, launched almost 8 years ago, still holds a position in the to 10 games by revenue. Fortnite was nowhere to be seen on this list.

Among Us topped the gaming charts in terms of most downloads in both stores, followed by Scribble Rider and Talking Tom Friends. PUBG Mobile was the only game in this list that also appears in the top-earning games list.

As we enter the last quarter of 2020, one thing is for certain - Zoom will stay in the top downloaded apps as it has become an important means of communication for most people.

Did your favorite app or game make it to the top downloaded list? Let us know in the comments below.