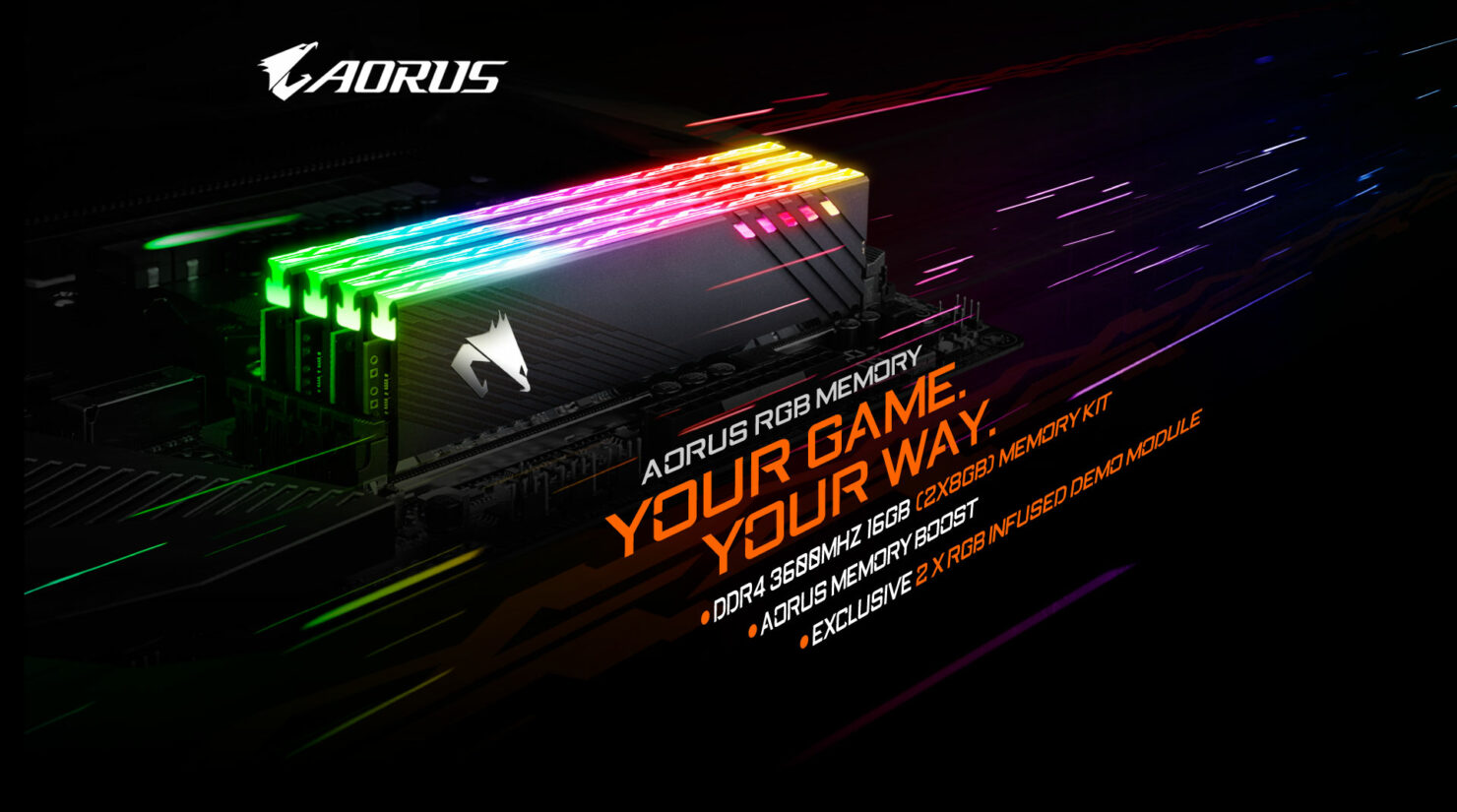 Users pairing the new AORUS RGB Memory with select GIGABYTE motherboards will be able to use the AORUS Memory Boost to accelerate DDR4 speeds to 3733MHz for superior memory performance. AORUS RGB MEMORY 16GB 3600MHz comes with a greater number of built-in LEDs to offer extra fluidity to the lighting display.

In addition to the exclusive light modes from the previous generation memory kit, the new Wave2 rainbow lighting effect can be used in synchronization with other components, offering incredible style. AORUS RGB MEMORY 16GB 3600MHz comes with both the RGB ready memory modules and the RGB ready dummy modules. Users can select their own memory profiles to work with and showcase their own lighting styles. Performance, style, and value, AORUS RGB MEMORY 16GB 3600MHz offers it all, staying true to the AORUS style.

To address this demand for faster memory frequencies and overall performance, AORUS RGB MEMORY 16GB 3600MHz supports the GIGABYTE exclusive AORUS Memory Boost function. With AORUS Z390, X570 motherboards, and XMP enabled on the new BIOS, users can activate the Memory Boost function and boost their memory frequencies to 3733 MHz without tweaking the timings. This allows for a 4% increase in read/write performance without overclocking so users don’t have to spend extra to buy XMP 3733 MHz memory but spend it on peripherals instead to build a more powerful system that also suits the user’s budget. Following is a list of the supported motherboards that feature the AORUS Boost functionality:

AORUS RGB RAM 16GB 3600MHz features aluminum heatsinks with an anodized hairline surface for a professional, stylish look and a screwless design for extra structural integrity. The main body of the heatsinks is chamfered and the AORUS styled groves offer a smoother grip on the memory sticks so users won’t scrape their fingers when seating the memory sticks. AORUS RGB MEMORY 16GB 3600MHz heatsinks are 3x denser than standard heatsinks and provide superior heat dissipation. The multiple grooves on the heatsink provide an extra surface area which also bolsters heat dissipation to prevent excess heat from slowing performance.

A fan and critics’ favorite from the first generation memory kit, the patented RGB dummy modules are back again in full force and enable users to fill out their memory configuration with the added effects of impressive RGB lighting. Users won’t have to spend an extravagant amount to buy extra memory kits to fill out their memory configuration as they have 2x RGB memory modules and 2x RGB dummy modules for their DIMM slots. Those who want higher-capacity memory can also get 32GB capacity memory to upgrade their overall memory performance.