Mirrors have been around for a long time, and have one job that they are able to pull off quite well, even if you have a cheap or an expensive product at hand. One Google engineer wanted something a bit more than the usual reflecting mirror, and so with his expertise under his belt and a bunch of spare time, he created an Android powered smart mirror that looks something straight out of a sci-fi movie. 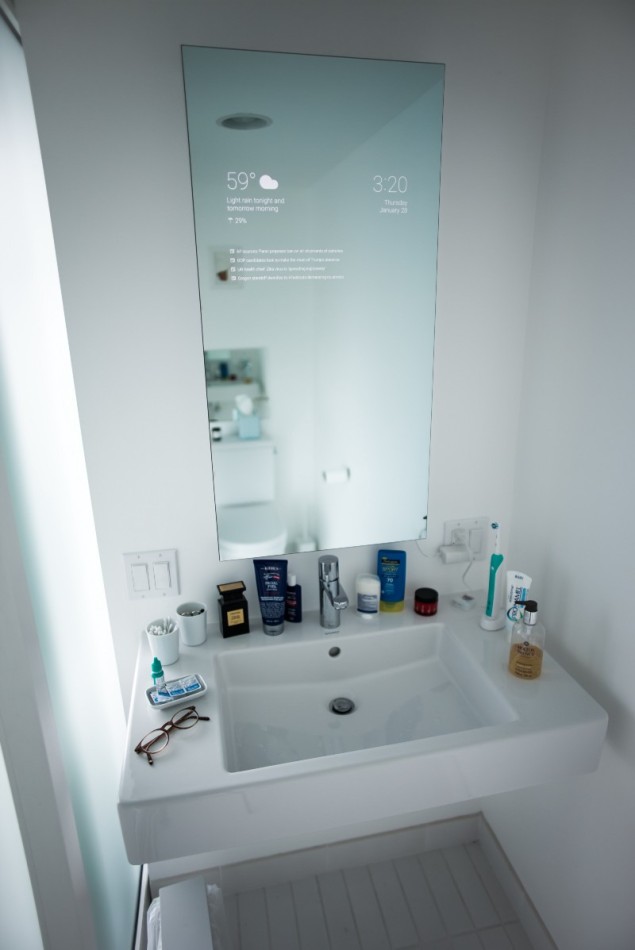 Google software engineer, Max Braun, wanted something on his bathroom wall that was promised to us 'in the movies.' While the future in which displays are lurking in every corner of our household might be a little far off, but that didn't stop Max from cooking up a smart mirror project in his own home. The results of which are spectacular to say the least.

There doesn’t seem to be anyone selling the product I was looking for. The individual parts, however, were fairly easy to get. A number of people have done similar custom builds recently, but I had something different in mind.

So I ordered myself a two-way mirror, a display panel and controller board, plus a bunch of components and arts & crafts supplies. In reality there was quite a bit of experimentation and some dead ends before I got to this set of parts, but let’s have a look at the finished — yet by no means final—result:

It's absolutely mind blowing what Max was able to achieve with off the shelf parts. But as it has been revealed above, it's by no means a final product and there's a bit more work that is needed to be done before things are finalized:

The code behind this UI uses some simple Android APIs (e.g. this one is neat) plus Forecast for the weather and the Associated Press for news.

Other concepts I’m playing with are traffic, reminders, and essentially anything that has a Google Now card. The idea is that you don’t need to interact with this UI. Instead, it updates automatically and there’s an open-ended voice search interface for anything else.

It's somewhat of a shame that we didn't get to see such a product up for sale anywhere at all just yet, given the advancements in consumer technology that have been made in the past few years. We're certain that we will eventually be able to buy such products for ourselves in the near future, but still, we at least expect Samsung to pull such a thing off for us.

Or maybe someone else?