With the recent release of the RX 5500 XT, AMD filled out the lineup of its graphics stack, bringing real competition to the budget GPU market. One of the new features that the Navi GPU featured on the RX 5500 XT is the support for PCIe 4.0 but while we haven't seen any real-world benefits as of yet, PCGamesHardware has put the card to the test and found out that PCIe 4.0 may not be the gimmick that everyone has perceived it to be.

In testing performed by German website PcGamesHardware.de, the results show that while the 4 GB variant had noticeably lower performance than the 8 GB variant in the few titles tested, switching over to the PCIe 4.0 delivered much more consistent frame times, offering a more playable experience than what was capable on PCIe 3.0 interface.

Switching the card to run on the PCIe 4.0 protocol the improved performance because of faster bandwidth which reduces the impact of the smaller VRAM buffer. While the 8GB version did have minor improvements when switching between PCIe 3.0 slot and PCIe 4.0 slot, the 8GB still vastly outperformed the 4GB version of the card even with the 4GB version being connected to a PCIe 4.0 slot. The 8 GB variant still managed to gain a decent improvement and it goes off to show just how memory and bandwidth starved the Radeon RX 5500 XT graphics card is. 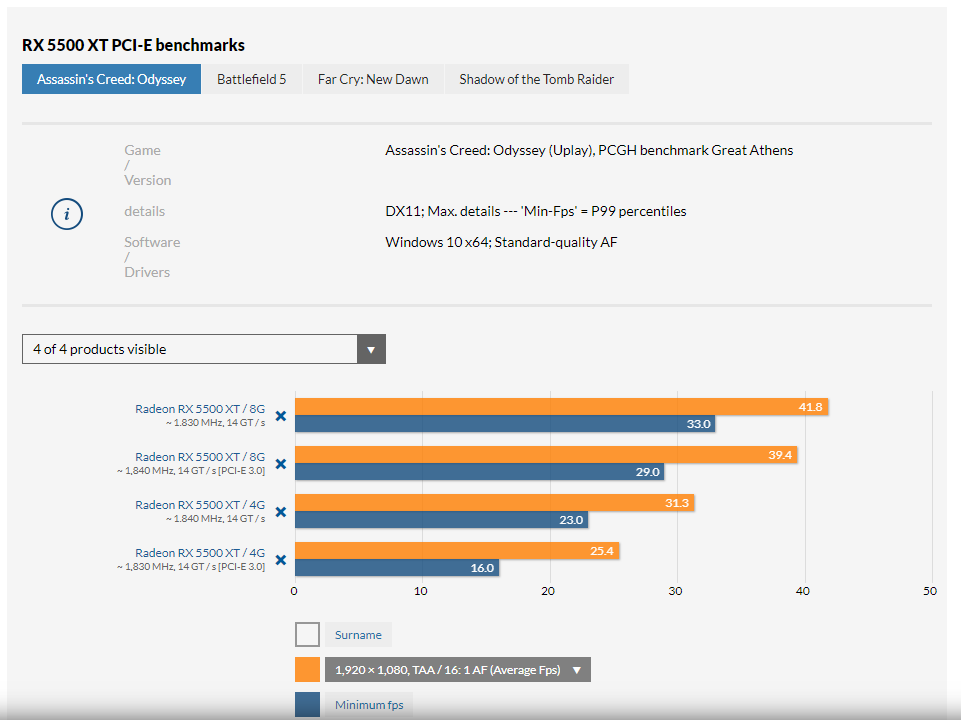 When the VRAM buffer gets filled up, the extra data is then forced to use the system memory to transfer data to and forth the PCIe bus, which is noticeably slower than the included VRAM on the graphics card. This is simply a case of switching from high-speed lane to a low-speed lane because the faster the bus is, the faster the data can be decoded and less likely the frame will be delayed which is why when using the PCIe 4.0 bus the 4GB version of the card showed a marked improvement. PCIe 4.0 is noticeably faster when compared to PCIe 3.0, and it is shown that the reads and write speeds of PCIe 3.0 were effectively half than when the card was connected to a PCIe 4.0 slot.

The RX 5500 XT cards are wired to be an x8 configuration while having a full x16 configuration would make the VRAM buffer significantly less detrimental for the performance of the card. If you're upgrading your PC, then an X570 platform along with the RX 5500 XT would be an obvious choice since the PCIe 4.0 protocol does deliver noticeably better performance. However, given that the Radeon RX 5500 XT 4 GB is a $159 US graphics card and the X570 platform is mostly geared towards enthusiasts, many users would just stick to a lower-end chipset motherboard since those can support Ryzen 3000 processors with ease.