In May 2018, AMD commissioned Toronto-based third-party software assurance firm QA Consultants to independently evaluate the stability of the latest drivers from both AMD and NVIDIA.

The results are now in and the audit crowned AMD drivers as the most stable in the industry, having passed 92% of the tests compared to NVIDIA's 82%. Below you can find the summary written by QA Consultants.

As GPUs advance in capability, more is demanded from the graphics driver. A good user experience hinges on a stable, reliable software stack. Using CRASH from Microsoft’s Windows HLK, we ran 12 days of 24-hour tests to evaluate the stability of a suite of graphics drivers from leading market vendors.
In our testing, both AMD gaming and workstation GPUs performed better than the comparable NVIDIA products. Based on our testing of the aforementioned 12 GPUs, we believe that AMD has the most stable graphics driver in the industry.

For its part, AMD shared the following takeaway from the audit via Andrej Zdrakovic, Corporate Vice President of Software and Platform Solutions.

Driver stability is a consistent priority for AMD and our engineering team is dedicated to testing and refining each new update to ensure users can depend on their Radeon cards. With the results of the QA Consultants report, we’re pleased to see the results of that commitment to stability that we’ll continue into the future of Radeon products.

Of course, it's worth keeping in mind that as much as this is billed as a third-party audit, it was still commissioned by one party with vested interests in the results. A healthy dose of skepticism isn't unwarranted. At the same time, QA Consultants already delivered over five thousand testing and consulting projects for all kinds of industries and they use the Test Factory, a 30,000 square foot facility, to conduct all their tests.

Below you can find the test systems and a brief video on the audit. 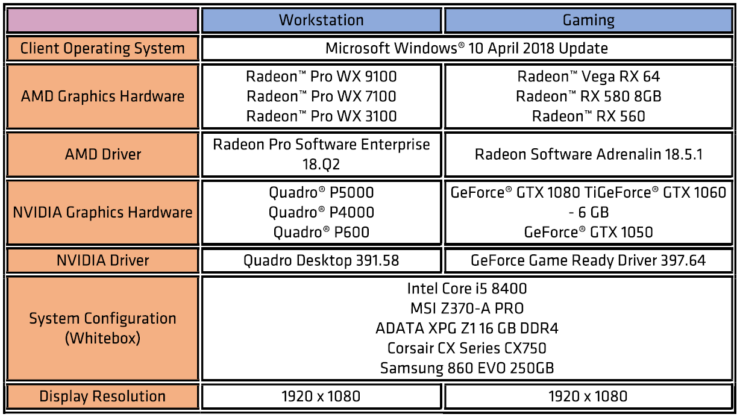