AMD's Kaveri APU is coming sooner this year, though some conflicting reports suggest February in 2014. However performance exposure of the more polished "Near Production Samples" have just appeared on various Chinese sites.

Kaveri, is a pretty big deal since it is the first APU that will utilize the Roller cpu Architecture and the GCN (Graphic Core Next) GPU Architecture. The manufacturing process has also been upgraded to the 28nm Manufacturing process of the wafer. Here are the Kaveri Samples floating around, one is supposed to be the Actual Engineering Sample while the other more interestingly appears to be the an actual "Near Production Sample" of the same. 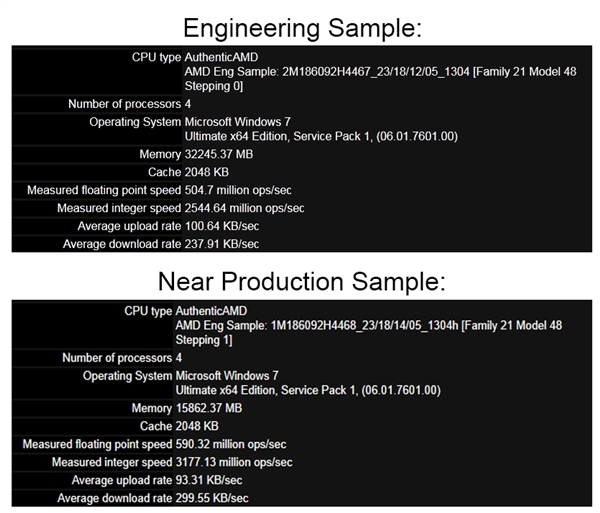 Amazingly the charts also reveal that the Kaveri Steamroller Integer Score is Better than Piledriver and Bulldozer by a decent amount. Relatively speaking if AMD FX Bulldozer is 100% (Piledriver 103% )than the Kaveri APU has an integer score of approx 135%. Quite a reasonable increase. However the APU looses about the same in the Floating Point department. Where AMD FX Bulldozer is 100% (Piledriver about the same) Kaveri Steamroller is about 85%.

The reason we figure is simple enough. Kaveri has a limited cache of just 2MB and in the modern age thats a tad bit on the lower side. The Clock rate is also slightly low @ 1.8 Ghz. However one thing is absolutely sure. If AMD continues refining the Kaveri Steamroller APU, Intel Haswell and the i7-4770k might be up for a direct confrontation.

#AMD #Kaveri Steamroller APU Real Performance Results Unveiled. Looks like #Haswell might just be in for a fight. http://t.co/VNhoMvV6Z2