As you may know, the AMD Catalyst 14.2 V1.3 Beta Drivers are out and ready to roll. This particular beta driver is all about Thief. On a side note, Battlefield 4 and the Mantle Low Level API get updates too. We have also noticed improvement in Battlefield 4 multiplayer and single player after the 14.2 update. Without further ado the download link and instructions. 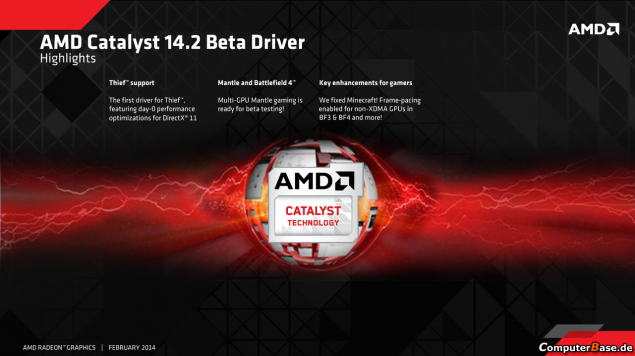 Now the Drivers in beta, so that means that there are bound to be issues, so keep that in mind. Also most of the Toshiba, Sony Vaio and Panasonic Notebooks are NOT supported and the mobile Radeon series currently will not have mantle support (you can find a cracked version of 14.1 online though). This also enables frame pacing in NON-XDMA Crossfire configurations not to mention the small bug fixes and performance increases. The funnies bug is that in Thief when cross fire or 3D is enabled, the right eye will not render.  Anyways without further ado the download link and install instructions.

Current driver MUST be uninstalled before updating to AMD Catalyst™ 14.2 Beta V1.3 driver. For detailed instructions on how to correctly uninstall or install the AMD Catalyst Software Suite, please refer to the following support resources: