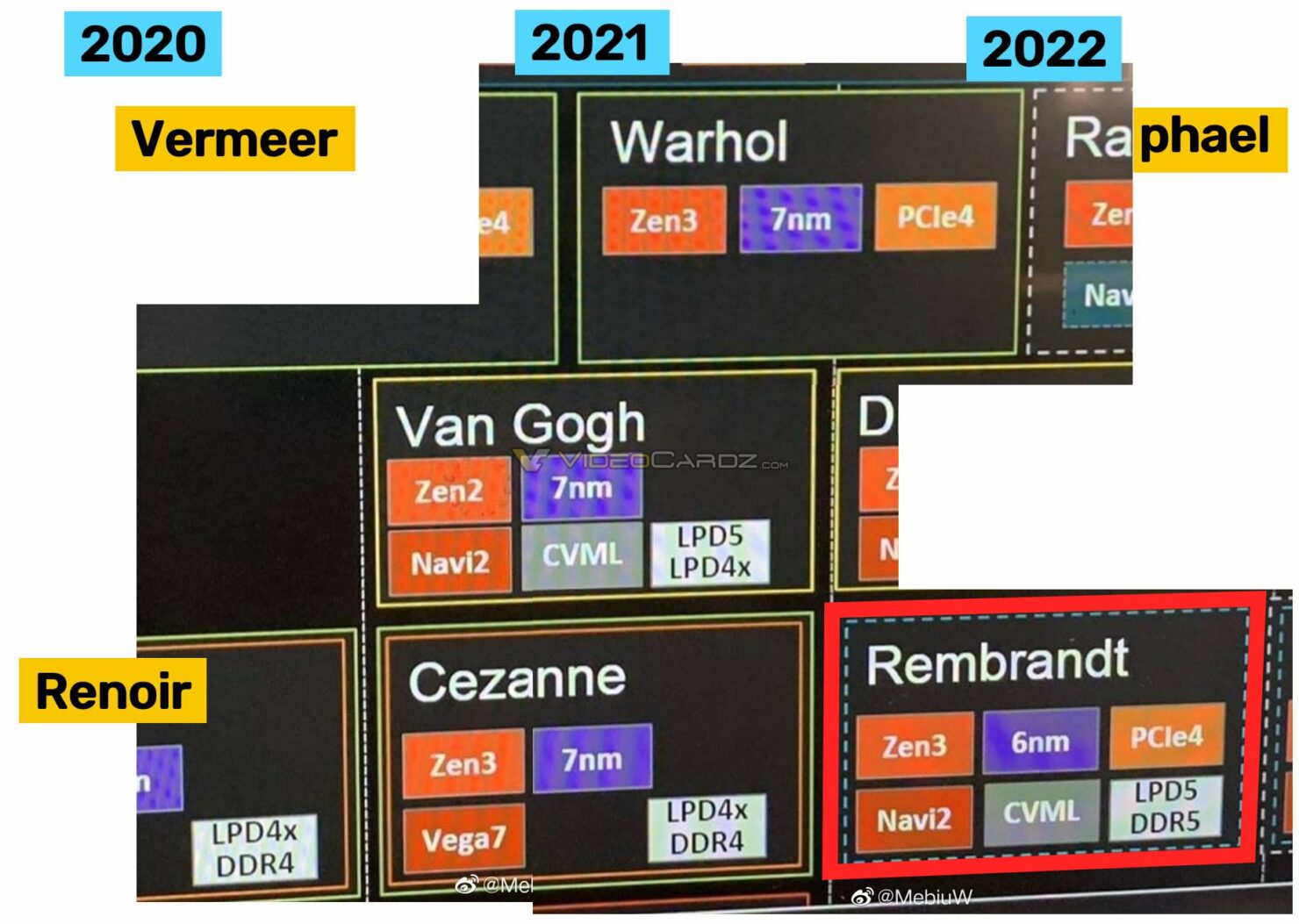 The roadmap for AMD's next-generation flagship APU that will feature an integrated Navi2 GPU has leaked out courtesy of _rogame. We will be seeing Cezannne next year rocking AMD's award-winning Zen 3 architecture but the iGPU is going to be limited to Vega to limit costs. According to the leak, however, we will be seeing Rembrandt on 6nm with Zen 3+ and a Navi2 iGPU sometime in 2022. The leak also contains a lot of other codenames that we have seen and heard before.

AMD VanGogh to be the first APU with an integrated Navi2 iGPU, flagship Cezanne in 2021 and Rembrandt in 2022

First up we have the roadmap for 2021. AMD will be launching a total of two Cezanne flavors in 2021 - namely a 45W and a 15W version. Usually, the 15W version is configurable to a higher TDP but AMD might decide not to do that this time to remain competitive with the Apple M1. Both Cezanne flavors will utilize Zen3 architecture with a Vega 7 iGPU. Lucienne-U is another APU that is based on Zen2 and will have a 15W TDp as well. All of these APUs are going to be fabricated on the 7nm process from TSMC. VanGogh with a TDP of just 9W is also part of the lineup and will be the second Zen2 part manufactured next year.

Interestingly, however, it will have a Navi2 iGPU making it the first APU with a Navi2 iGPU. AMD even has a vanilla Zen APU called Pollock with a TDP of just 4.5W and fabricated on the 14nm process (probably from Global Foundries since it would fit in with their Wafer Supply Agreement requirements?)

AMD will keep its foot on the pedal in 2022 as well. First of all, their main lineup will involve the anxiously anticipated Rembrandt lineup (once again in 45W and 15W flavors) which is not only feature AMD's advanced Zen3+ architecture but will feature Navi2 iGPUs as well. Both Rembrandt APUs will be manufactured on TSMC's 6nm processor - which should lay to rest any rumors of it being manufactured on the 5nm process. Rembrandt will feature LPDDR5 (something Van Gogh will introduce next year) as well as DDR5. Barcelo-U will succeed Vangogh with no apparent change and is likely to be a refresh. Pollock production will continue into 2022 making it the only part not to be discontinued in that year.

2021 is shaping up to be a very exciting year for PC enthusiasts. Intel will *finally* transition away from the base Skylake architecture to Sunny Cove (in Rocket Lake), NVIDIA's GPUs are going to be easily available as Samsung improves its yields and we might get lucky and see Intel transition to 10nm on desktop properly before the year is over. And of course, you can always count on AMD to roll out iteration after iteration of its popular APUs and CPUs. 2021 is also going to be a great year to upgrade because pretty much all major platforms will support PCIe 4.0 (Intel does not currently support it) and with the insane speeds that NVME PCIe 4.0 SSDs provide - you would be wise to wait till the first quarter of 2021 before deciding to upgrade.