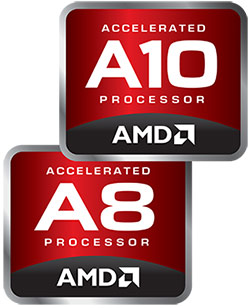 The new AMD A-Series APUs would be launching tomorrow however US Online retailer Amazon has already listed several Desktop APUs. The second generation Trinity A-Series would feature enhanced CPU and GPU performance compared to Llano and would allow compatibility with the latest FM2 socket motherboards based on the A85X chipset.

The flagship A10-5800K is currently listed for $149.99 ($137.23 updated price). The fastest of the A-Series feature a Quad Core design with turbo speed upto 4.2GHz and a HD7660D IGP with 384 Stream processors. The APU further offers a 100W TDP and K Unlocked multiplier for overclockers to rejoice. The pricing scheme pretty much matches that of the last year Llano A8-3870K flagship but performance has improved due to the addition of Piledriver core architecture.

The A8-5600K which as the name suggests features an Unlocked multiplier is being sold for $112 (Boxed version). The APU runs at 3.9GHz turbo frequency maintaining a TDP of 100W. The GPU part consists of a HD7560D chip which has 256 Stream processors.

The AMD A-Series APU's have already been announced and you can check out various previews in our article here. All that remains is the retail availability of the FM2 motherboards and A-Series Trinity APUs which is expected tomorrow.