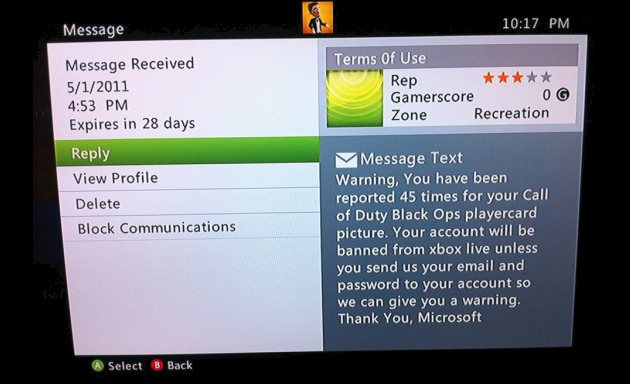 First PSN and now Xbox 360 users have been hit by a potential security risk in which most of the Xbox Live players are being targeted by Random Phishing attacks which can lead to their accounts getting banned. The news popped up last week when a potential phishing attack was launched against the "Call of Duty: Modern Warfare 2" players on Xbox 360.

However, The issue ain't big as the PSN one as the Xbox live service is still running but was serious enough for the company to issue a Service Alert to warn all Xbox Live users of the potential security risk.

Be alert, not alarmed
According to the alert:

We are aware of the problem and are working to resolve the issue. We apologize for any inconvenience this may cause and thank you for your patience."

Robert Bowling, creative strategist at the game's development company, Infinity Ward, has also spoken out. "We have a patch in the process of testing for release that should be out soon," he said in a written statement.

Call of Duty: Modern Warfare 2 still has a large online players user base with the only leading title to be its successor "Call of Duty: Black Ops". However users are advised to be extremely careful whether you're surfing, using email, chatting in an instant messenger program, or just playing a game unless the patch is released by Microsoft to fix the security flaw.