Activision Blizzard (NASDAQ:ATVI) have released their earnings for the quarter ending March 31, 2021, and it was another very good three months thanks to the ever-bountiful Call of Duty golden goose. Acti-Blizz delivered $2.28 billion in net revenue in Q1 (their fiscal year coincides with the regular calendar year), above the $2.02 billion the company was expecting. GAAP earnings per share for Q1 were $0.79, above guidance and the $0.71 investors were expecting. Activision Blizzard stock has jumped around 10 percent after-hours following the good report. 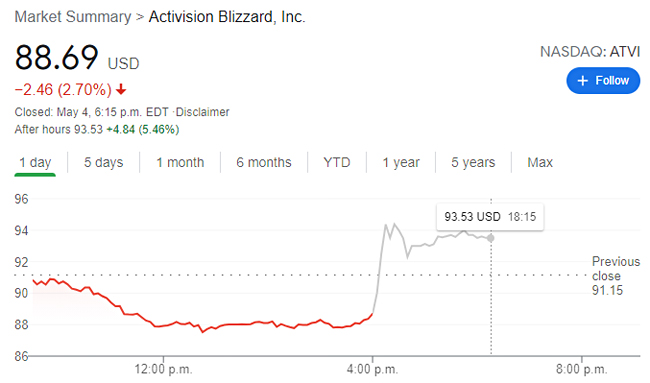 Call of Duty Aims Higher Than Ever

As has been the case for a while now, Activision Blizzard is increasingly powered by Call of Duty, which drove a 72 percent year-on-year increase in business for the Activision segment. The combination of traditional Call of Duty experiences and the free-to-play Call of Duty: Warzone battle royale has been particularly impactful, tripling the franchise’s monthly active users over the past two years to a whopping 150 million. Call of Duty: Black Ops Cold War was officially integrated with Warzone in Q1 following a delay, leading to a major boost in the former’s sales and a 40 percent year-on-year increase in MAUs. Call of Duty Mobile is also an increasingly important part of the puzzle following the free-to-play game’s launch in China. Call of Duty Mobile has been downloaded more than 500 million times and has generated over $1 billion in revenue since its 2019 launch.

Meanwhile, the Blizzard half of Acti-Blizz continues to be increasingly all about World of Warcraft. Positive response to the World of Warcraft: Shadowlands expansion led to a respectable quarter and a 7 percent year-on-year increase in revenue to $483 million, although MAUs dropped from 29 million to 27 million. This slow decline in Blizzard’s playerbase is unlikely to reverse itself soon, as new Blizzard games like Diablo IV and Overwatch 2 won’t arrive until 2022 at the earliest. As for Acti-Blizz’s dependable King mobile game division, it continued to mine Candy Crush to the tune of $609 million in revenue.

Activision Blizzard used its earnings announcement and call to ensure investors the Call of Duty gravy train will keep right on rolling. Following rumors, the company confirmed that a new premium Call of Duty title will be arriving this year from Sledgehammer Games, and that the currently-unnamed game (likely to be World War II based) will integrate with Warzone. Here’s what Activision Blizzard COO Daniel Alegre had to say about the new game (thanks to Charlie Intel for the transcription)...

In particular, we are very excited for this year’s premium Call of Duty release. Development is being led by Sledgehammer Games and the game is looking great and on track for its fall release. This is a built for next generation experience with stunning visuals across campaign, multiplayer and co-operative modes of play, designed to both integrate with and enhance the existing COD ecosystem. We look forward to sharing more details with the community soon.

Acti-Blizz is also using their recent Call of Duty windfall to greatly expand their development capabilities. They’ve already opened a new Sledgehammer Games location in Toronto, Canada, and have plans to hire over 2000 developers over the next year, tripling the size of their Call of Duty teams. Needless to say, if these expansion plans pan out, Acti-Blizz’s current CoD success may be looked back on as simply a prelude to much bigger things.

Following their impressive Q1 results, Activision Blizzard have raised their FY 2021 outlook from $8.23 billion to $8.37 billion, with a Q2 outlook of $2.135 billion. Given Activision Blizzard’s recent run it seems very likely they’ll meet and exceed those expectations.