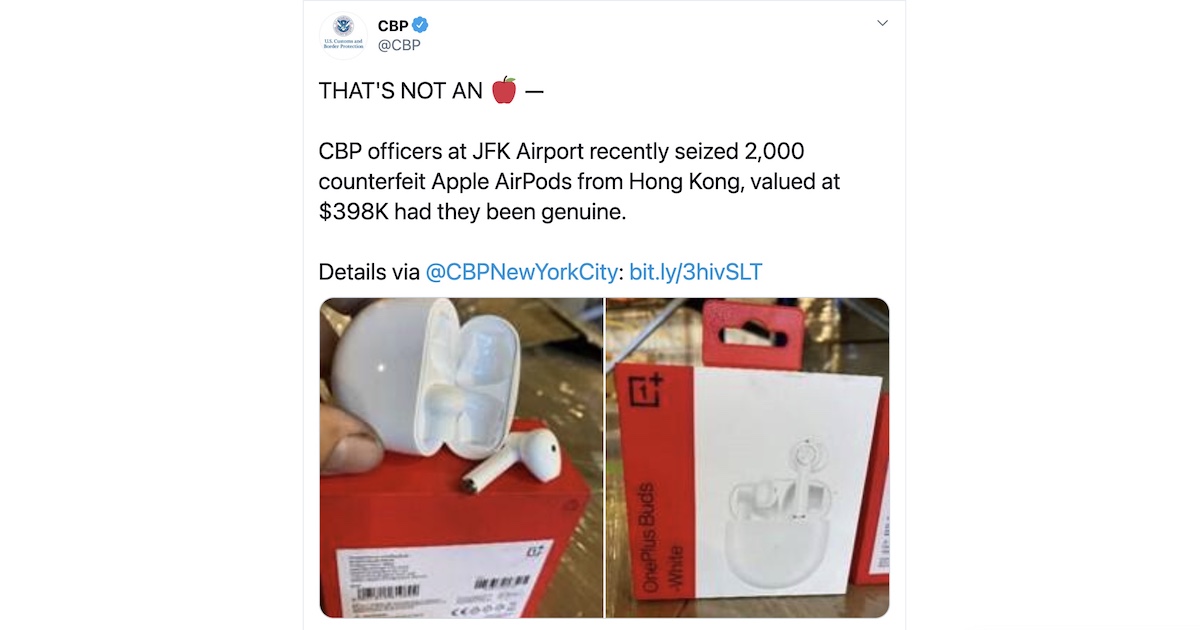 In an odd turn of events, the US Customs and Border Protection seized $398k worth of OnePlus Buds which they believed to be 2,000 counterfeit copies of Apple's AirPods. The shipment was arriving from Hong Kong, and CBP put out a tweet and press release regarding the incident.

In its tweet, the CBP claims with the use of an Apple emoji that "that's not an 🍎" and details how its "officers seized 2,000 counterfeit Apple AirPods from Hong Kong, valued at $398K had they been genuine". A couple of photos of the OnePlus Buds are also part of the tweet, which clearly shows the brand name of the product.

CBP officers at JFK Airport recently seized 2,000 counterfeit Apple AirPods from Hong Kong, valued at $398K had they been genuine.

Even OnePlus' official social media account found this hilarious and jumped in on the situation:

Oddly, in its press release, CBP mentions AirPod instead of AirPods, so no wonder they were confused with the supposedly 'counterfeit' products.

Despite the goof-up from US Customs and Border Protection, the irony is not lost that OnePlus basically ripped off AirPods design. Although these look nothing like the AirPods Pro, they look exactly like the first and second-generation AirPods, specially from the picture on the packaging. Don't be surprised to find out that the Customs folks are not the only ones who would be mistaking these for AirPods - this would be the case with a lot of the average folks who are not tech enthusiasts like us.

It is important to note that there are countless counterfeit AirPods available around the world, which do not even have any unique branding. A quick Google search can surface many copies which even have the same pairing process with iOS that the original AirPods have. However, we almost never hear about those counterfeits getting caught.

Maybe OnePlus should 'never settle' with re-using another company's design to avoid such an embarrassing situation in the future. If your products are being considered knock-offs, then maybe it's time to get back to the drawing board.