Latest pictures and details of ZOTAC's GTX 670 Extreme Edition graphics card have emerged which suggest that the card is based on a beastly PCB designed featuring some of the most high class components ever used on a GTX 670.

For example, The GPU core along with its 2GB Hynix GDDR5 memory chips are powered by an 8+3Phase VRM equipped with the bleeding edge International Rectifier GaNpowIR driver-MOSFETs, server-grade tantalum capacitors, and FPCAP multi-phase capacitors, All driven by the CHiL CHL8318 VRM controller.

The clock frequency is maintained at 1100MHz/1200MHz for Core and Boost respectively while the memory runs at 6600MHz up from 6GHz on reference models. The GPU is powered by 8+6 Pin connectors and voltage measurement points are located right next to them. ZOTAC has also included the OC+ module which is a USB controlled expansion card which fits in the drive bay located at the front of the PCB allowing for voltage/clock adjustments and GPU monitoring.

The cooler itself is a mammoth featuring five 9mm heatpipes running through the dense aluminum fin array and cooled by dual fans. ZOTAC adds a backplate and a PCB supporter in the package. Card hits retail next month. 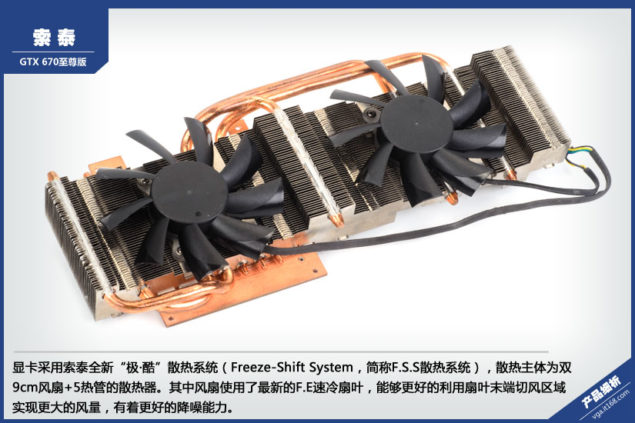