ZOTAC's upcoming GeForce GTX 650 Extreme which makes use of a custom designed cooler and 2GB memory has been pictured and detailed.

The ZOTAC GTX 650 is based on the GK107 core architecture which packs 384 cores, 2GB GDDR5 (128-bit) memory whereas the reference models would arrive with 1GB vram. Core clock remains unknown though the reference frequency is 1058MHz without Turbo Boost technology. The exact model of the core is "GK107-450". The memory operates at 6GBPs  and the whole PCB measures 7.5 inches in length.

The core is powered through a 3+1 Phase VRM which is supplied juice through a single 6 Pin connector. The cooler is the main attraction of this mainstream GPU which retains a design from the higher end Zotac Extreme series GPU's. The cooler uses a dual fan design with a yellow and silver color scheme. Underneath the shroud lies a large aluminum heatsink array which cools the GPU.

Display outputs include Dual DVI, HDMI and Display port. The card would launch on 12th September, its currently available for pre-order for 1299CNY or $200US which is quite high but the official price is expected to be much lower so stay tuned for more info. You can also check out the reference models here. 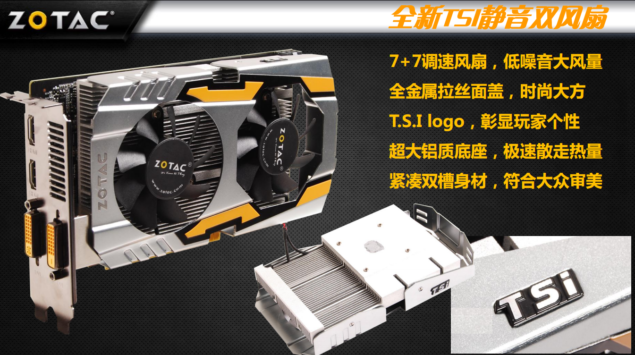