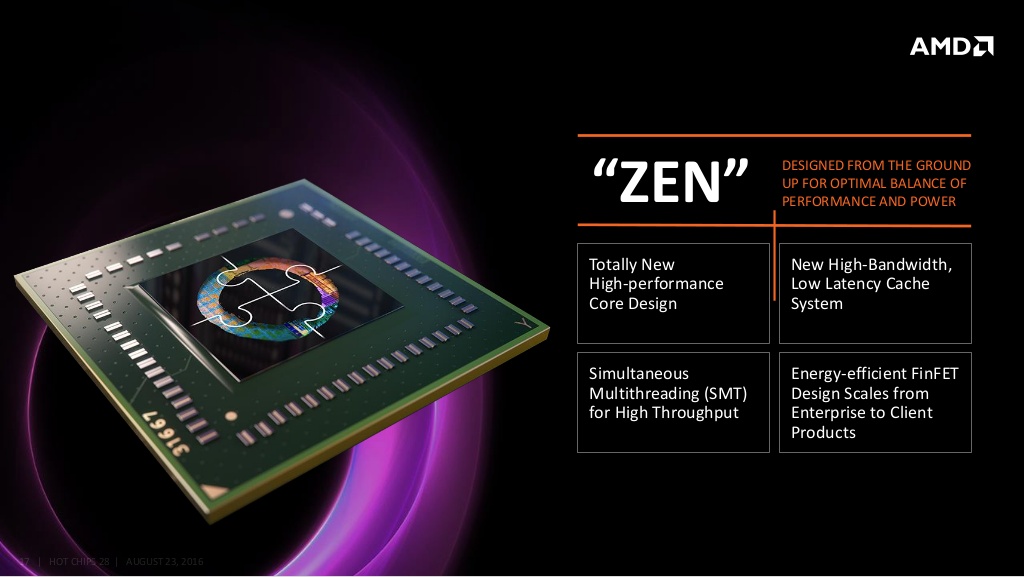 AMD's Zen architecture is poised to be a game changer for the chipmaker.

AMD has been more or less out of the running for notebook processors since Steamroller first came out. All this, however, stands to change with the introduction of its Zen based x86 processors. Talking to sources familiar with the matter, we were told that Zen equipped notebooks will hit the shelves sometime in 2H 2017. This is going to open up new sources of income for the chipmaker and also signify its entry back into the mainstream x86 market in full force.

Zen architecture is the cornerstone of AMD's strategy to turn the ship around and it is readily apparent from their recent corporate actions that they aren't playing around when it comes to Zen. AMD has recently demonstrated Zen's performance using a custom Blender workload. While it goes without saying that a first party benchmark must be taken with a grain of salt, if the truth lies anywhere near what they are demonstrating then Zen is poised to be the biggest change in the company's lineup since quite a few years.

It can be argued that you can boil down AMD to two essential components: the CPU side and the GPU side. Radeon and RTG have always managed to stay competitive against Nvidia, going toe to toe with it for nearly every generation since the past few years. It is only this year that the company appears to have skipped a beat on the high-end side and slowed down a bit to focus on economics. While that in itself isn't a bad thing (focusing on economics is certainly not bad for the company) it does go on to show that it is the CPU side that has been lagging. 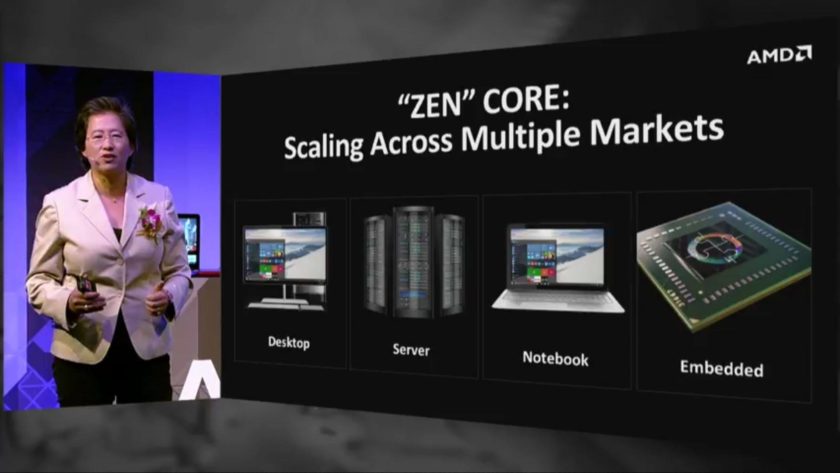 A slide from the AMD presentation showcasing the lego-like scalability of AMD's Zen architecture.

The effect of this meant that AMD CPUs have been mostly phased out from the mainstream and OEM sectors. Their APUs are still pretty well grounded in the low-end mobility industry, but the same cannot be said for the mid to high segment - especially the mobility variants. Intel counterparts dominate the scene almost entirely, be it the mobility side with their ULV offerings or the desktop side with the mainstream Core offerings. Sure, AMD has managed to find quite a niche for itself in terms of value-oriented enthusiasts who will gladly buy the old FX series for the performance/$ argument but it does not compare to what a true market share in an upgrade cycle means.

According to the benchmarks revealed by the company, however, their 8 core Zen is just as good (if not better) than an Intel 8-core counterpart that they tested. This level of performance, combined with AMD's value-oriented pricing policy would mean an instant win in everything from the low end to the mid-high end segment. The only real area where Intel would still be able to keep easy hold off is the high-end segment - although even that could come under fire sooner than expected. Of course, it goes without saying that we are all (including AMD) working on a very big assumption here: that Intel does not suddenly change its pricing policy and start slashing prices across the board to beat AMD's. If they do this, all bets are off.

There are two reasons why that assumption is probably justified. 1) Intel is a much much different organism than AMD. Unlike the latter, it is a very large corporation that does not have as much flexibility in margins as does AMD. Of course, unlike AMD though, Intel is not in any financial hot water and can easily afford to run on contra revenue basis for as long as they want.  2) Intel jumping the gun with predatory pricing might lead them into hot water due to Anti-Trust policies (this might seem counter-intuitive due to the fact that AMD is a competitor and Anti-Trust is supposed to make sure that the consumer wins, but in this case, Intel's actions could lead to the company going bankrupt and Intel becoming a monopoly which begs the question of Anti-Trust.)

Zen architecture is, figuratively speaking, AMD's Hand of Midas because everything it touches will turn to gold. With Zen on the table, AMD will be capable of re-entering the Notebook side of things with Zen mobility chips. Considering the fact that they now have an amended WSA in place to counter any foundry-associated risk with GlobalFoundries, and a capital injection from floating shares to counter any capital-associated risk due to the amended WSA, it is clear that AMD has gone all in.