Xiaomi has managed to beat Fitbit and become the world's largest wearable vendor in the second quarter of 2017. The news comes from a research firm, Strategy Analytics, which depicts that Xiaomi, for the very first time, has overtaken Fitbit in the wearable industry with an estimate shipping of 3.7 million devices. While the Chinese wearable vendor grew in sales, Fitbit saw a 40 percent plunge. Not only Fitbit but Xiaomi also beats Apple in selling wearable devices. So let's dive in to see some more details on the subject.

The firm's latest report suggests that the total shipments from companies were 22 million. The total number features an 8 percent growth compared to the same time last year. With that said, Xiaomi managed to capture 17.1 percent of the total wearable market, overtaking Fitbit as well as Apple. Compared to last year, Xiaomi's total sales have grown by 23 percent. The company's Mi Band was particularly popular in its host region of operation. The Chinese vendor has also kept itself competitive in providing the latest tech and functionality to users, which includes the heart rate monitor in the Mi Band 2.

While Xiaomi is in the lead, beating the giants of the industry, the company is still close to the market share ratio with Fitbit, which has also managed to score 15.7 percent. While this may be the case, it's worth noting that Fitbit's share has dropped drastically from last year's 28.5 percent. 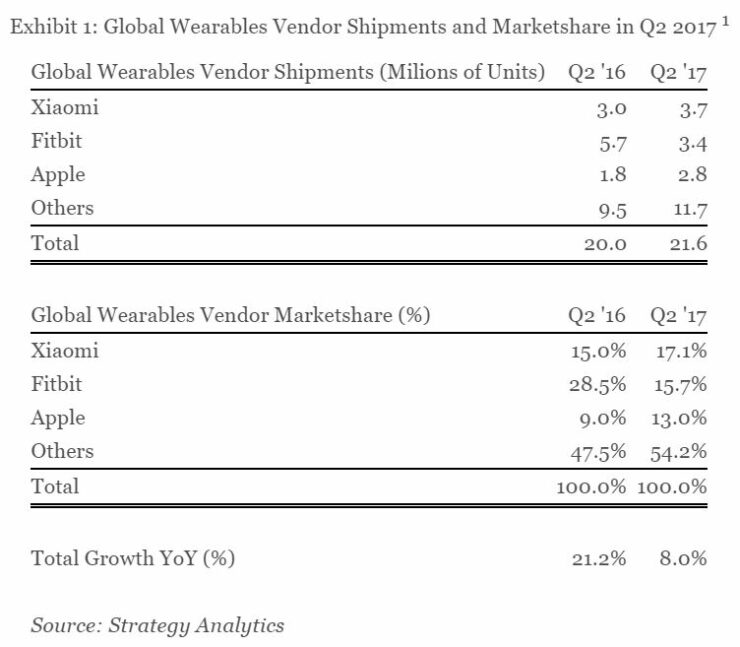 Apple on the other hand manufactures high-end wearable of the top three. The iPhone-maker managed to seep in an estimated 2.8 million units. This is still a win for Apple as it did gather a growth of around one million devices and close to 56 percent growth in the same time period last year. Strategy Analytics’ Neil Mawston states, “Fitbit is at risk of being trapped in a pincer movement between the low-end fitness bands sold by Xiaomi and the fitness-led, high-end smartwatches sold by Apple,”

At this point in time, Fitbit is left in the middle where it cannot compete against the likes of Apple's high-end premium product and Xiaomi's entry level fitness tracker options. The Mi Band adopts the destroyer pricing strategy costing only $14.99 in the United States. The Apple Watch on the other hand starts at $269. There will be more to the story so be sure to stay tuned in for more details.

This is it for now, folks. What are your thoughts on Xiaomi beating Apple and Fitbit to become the world's top wearable vendor for the first time? Share your views in the comments.