As we head towards the end of March, Xiaomi's Mi6 is starting to become a regular part of the rumor mill. The Chinese firm lost traction in Western markets after its delay with the Mi4's successor. But it looks ready to make a comeback now. The Xiaomi Mi6 is rumored to be an amazing smartphone with a very competitive price. Today, we've got more details for the device. Take a look below to find out more.

If there's one thing that's consistent for flagship smartphones, it's their price. Whether we talk iPhone, the Galaxy S, the Pixel or LG's G lineup, high price points are what keep things up and running. This year in particular, prices will reach new levels. Both the iPhone 8 and the Galaxy S8 will be well out of reach from ordinary consumers. The Galaxy S8 and S8+ will cross $800 and $900 respectively. The iPhone 8 will cost even more. Sources expect Apple's flagship to cross $1000 for its price. All the shiny new screens, processors and designs will cost a lot.

But, if you're looking for a smartphone with a 10nm processor with a good price tag, look no further. Today, we've got a corroboration for the Xiaomi Mi6's price tag. One of the earliest leaks for the device pegged it with a $299 price tag. And today, retailer Oppomart has listed the smartphone on its site. As you'll see in the image below, the Xiaomi Mi6 will cost no less than $299 - a price tag around which we can all get around. 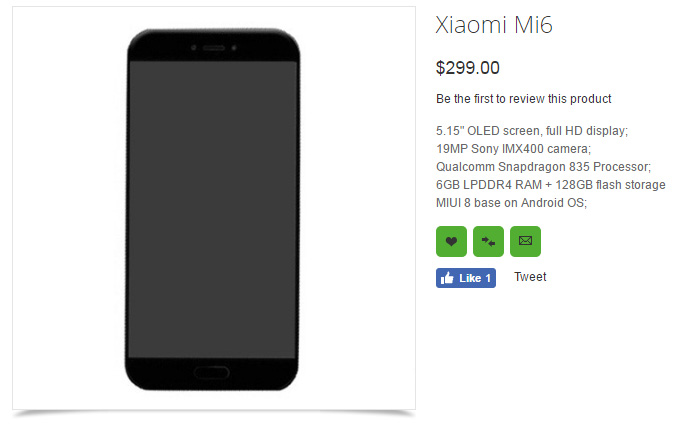 In addition to the price, the retailer also lists detailed specifications for the smartphone. As rumored, the Mi6 will feature Qualcomm's Snapdragon 835. This will be supplemented by an aggressive 6GB RAM and a 19MP Sony Exmor camera sensor. Recent image and case leaks peg the device with a dual camera setup. That makes us wonder about the resolution for the entire setup rather than just one sensor. Interestingly though, while the 'description' category lists a 13MP front camera, the 'specifications' category pegs it with a 6MP sensor.

Display size is listed as Full HD with 5.15 inch screen estate. Rumors peg the Mi6 with a 5.2 inch screen. It's the price tag that makes us wonder at what's going on over at Xiaomi. If this turns out to be true - and that's a big if - we hope that the manufacturer's cost cutting doesn't impact the phone's quality. Nobody wants another Galaxy Note 7 after all. Thoughts? Let us know what you think in the comments section below and stay tuned. We'll keep you updated on the latest.