The Xiaomi Mi5 Might Be Coming This Year As Teaser Surfaces

With all the hype these days surrounding Apple's upcoming iPhone 6s launches and Google's much talked about Nexus devices, one device seems to have been lost in all the chatter. Chinese smartphone starlet managed to impress quite a lot of folks with its reasonably priced, yet elegantly designed and spec'd Xiaomi Mi4. Well, the successor of the Mi4 has been long due from China's end as well, and Xiaomi seems eager to be not left out in all the hype. The Xiaomi Mi5 sees a teaser image posted today and you can take a look at it below. 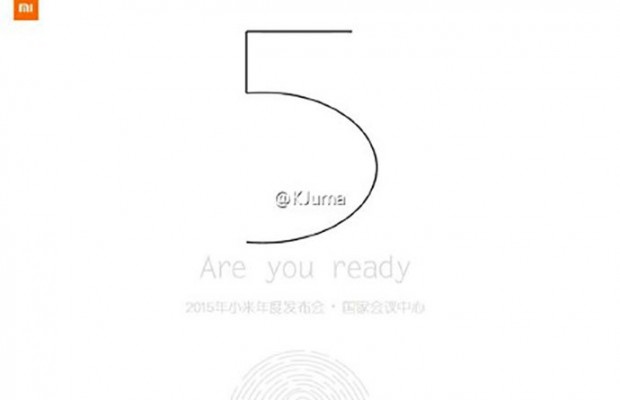 Dubbed as China's Apple, Xiaomi was perhaps one of the first Android manufacturers to truly understand the importance of balance between aesthetics and top-tier performance. The Mi4 came boasting specifications worthy of a true flagship, but also came with a design that was strictly minimalist in nature, but managed to be aesthetically appeasing as well.

But the Mi4 was over a year back, and Xiaomi should be eager to rush its latest flagship smartphone out as well. With the Snapdragon 810 not performing up to pace, the Chinese manufacturer seems to be caught in quite a rut when it comes to the processor on its flagship. Several rumors have placed both the Snapdragon 820 and the Snapdragon 810 on the Xiaomi Mi5, but looks like the device might be coming with the latter.

But if today's information is correct, then we might be getting to see the Mi5 this year, which means that the device should be coming with the Snapdragon 810. Xiaomi's already released the Redmi Note this year with the processor, so perhaps the Chinese manufacturer has had plenty of time to rework the chipset. After all, the Note was said by Xiaomi to come with v2.1 of the Snapdragon 810, which allegedly managed to control throttling issues on the processor.

As 2015 reaches its final quarter, many manufacturers seem to be eager to leave their mark for the year, and we'll be hear to update you as they do. We might be in for some interesting devices this year, so stay tuned and let us know what you think in the comments section below.