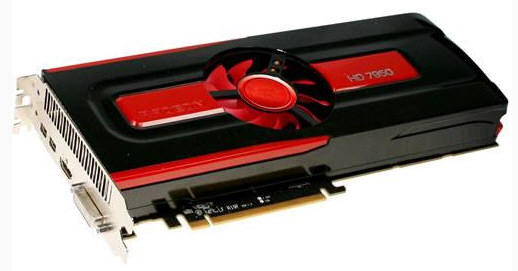 Three Radeon HD7950 models have been listed online in Europe, These include the XFX Core Edition R7950, Gigabyte WindForce x3 Radeon HD7950 and the reference model from AMD. 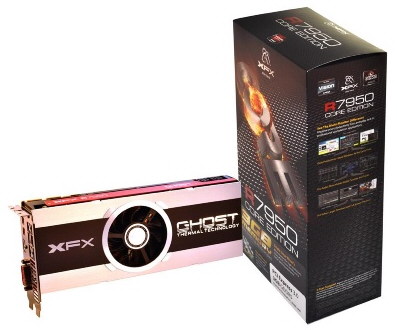 The XFX R7950 "Core Edition" features the reference clock speeds, The card uses GHOST Thermal Technology as hinted over the card's sticker. A double dissipation version of the card is expected after official launch. It has been priced at 419 Euro.

Gigabyte's Model - GV-R795W3-3GD looks like a factory overclocked variant with core clock set to 900Mhz and also uses the WindForce x3 heatsink which features a larger heatsink block with 3 fans to cool down the heat. The card can be ordered at 483 Euro.

A Reference model from AMD has also been listed for 519 Euro, The card features the stock specs featuring DirectX 11.1 and OpenGL 4.2 support, 1792 Stream Processors, a 384-bit memory interface, 3 GB of GDDR5 VRAM clocked at 5000 MHz, CrossFireX support, 800Mhz Core clock (900 on Gigabyte). All GPU's have the same amount of Display outputs which include DVI x 1, HDMI x 1, mini DisplayPort x 2.