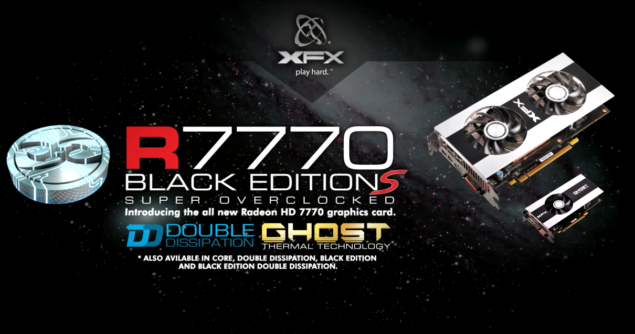 Both HD 7770 and HD 7750 are available in three Performance Tiers: Black Edition for the ultimate enthusiast wanting to push the performance to the limit, Double Dissipation Edition for the quietest and coolest, and Core Edition for mainstream gaming.  And each of these products features some exciting advancements, bringing new highs to the entire graphics card industry, including major upgrades to performance, power efficiency, speed, cooling, architecture and visual effects. 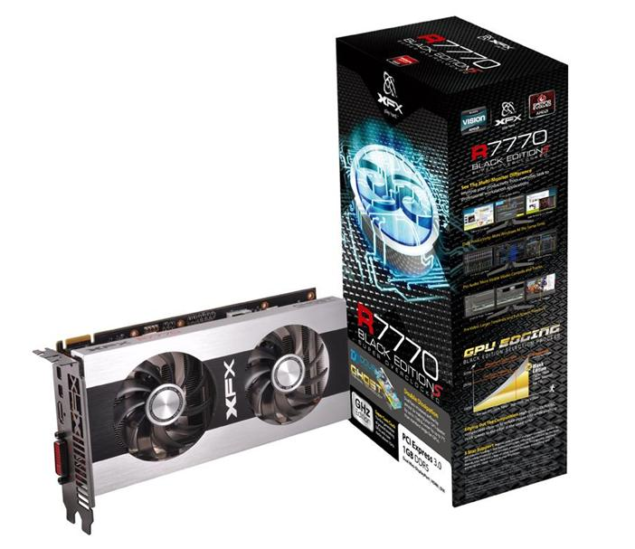 “Ghost Thermal technology is the optimal thermal design that allows air to pass through the heatsink directly to the PCB and core components,” notes Techpowerup.com in a recent review of the XFX Radeon 7000 line. “All of this combined with XFX’s award-winning Double Dissipation dual-fan design makes it one of the coolest and quietest cards on the market while simultaneously increasing overall graphics card performance and lifespan.”

Maximum PC noted the sleek design of the Ghost Thermal technology found in XFX 7000 series cards by noting in a recent review, “XFX’s dual-fan custom cooler, housed within an attractive brushed-metal housing, looks much more elegant than most of the competition.”  Additionally, Motherboards.com noted in a review of a 2012 Black Edition card, “XFX have really raised the bar in terms of both esthetics and cooling performance…XFX build quality and selected materials are also top notch.”

All XFX cards now include ZeroCore Technology support, allowing it to give PCs a 95% idle power reduction, when no fan or card needs to be used. Another exclusive feature is the all-new PowerTune performance management utility. This feature can adjust the voltage and core speed to match application type, finding the perfect balance when games demand more processing power.  This feature also allows the user to control TDP performance ranges.

XFX cards also feature the very cutting-edge of graphic sophistication.  With its Partially Resident Texture features, the most realistic textures now can be partially loaded in memory for quicker access to free up GPU resources.  Implemented via the hardware, greater texture detail and depth is now possible and larger textures can be more efficiently used on a much larger scale.

Additionally, an exciting Hollywood special effects technology, previously used in blockbusters like Hancock, Sherlock Holmes, A-Team and the upcoming 2012, are available to gamers through the Bullet Physics Engine. This standard for game physics, provides more realistic collisions, water flow, waves, weather and other environments.  It also allows gamers to destroy buildings and other in-game objects with ultra-realistic details.  Unlike other industry engines that lack proper CPU optimization and are proprietary, Bullet Physics Engine is Open Source and the choice of game developers and movie special effects houses.

Many of the new XFX features are elements that allow for the next generation of technology to be seamlessly incorporated into the design.  All XFX cards are PCI-E 3.0, anticipating the next generation of the PCI bus type that is faster and uses less power.  Each XFX card is also HD4K ready, being the first card available to mainstream consumers.  Previously priced out of the consumer market, HD4K technology gave only the military and air traffic industry the ability to see graphics clearly from a great distance for precision airstrike and landing maneuvers.