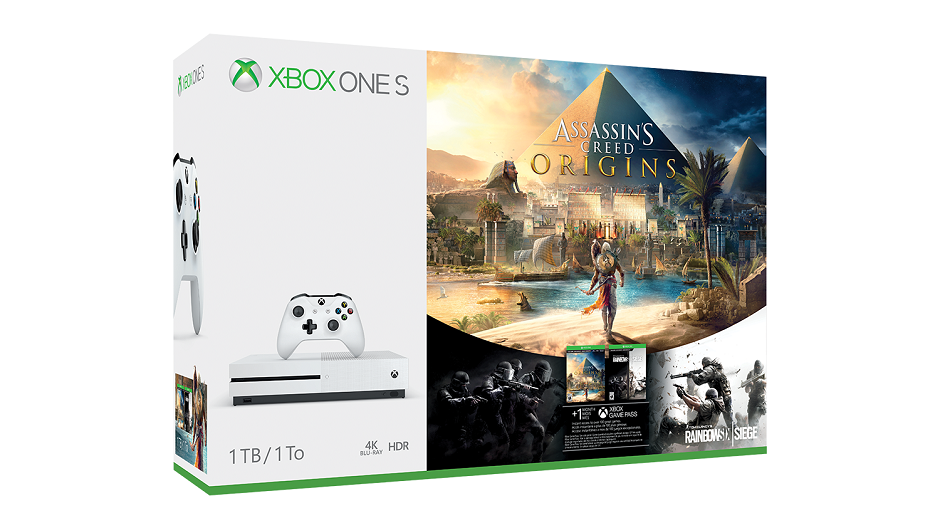 Releasing later this month on October 27, the bundles include an Xbox One S with either a 1TB or 500GB HDD, a wireless controller, and download codes for Assassin’s Creed Origins and Rainbow Six Siege. Additionally, the bundles contain a 14-day Xbox Live Gold trial and an Xbox Game Pass subscription for 1 month. This pass gives players unlimited access to “over 100 highly rated and fun Xbox One games with new games being added all the time”.

With Xbox One S, you’ll also enjoy a built-in 4K Ultra HD Blu-ray player, 4K video streaming with access to all of your favorite entertainment apps like Hulu, Netflix and more, premium audio with Dolby Atmos support and experience the richer, more luminous colors in games and video with High Dynamic Range (HDR) technology. Play with friends near and far on Xbox Live and gain access to your favorite apps like YouTube, HBO GO, Spotify and ESPN.

The Xbox One S is available now globally. As said, AC Origins is slated for a release on October 27 with a free Xbox One X update for the title being made available alongside the console’s release on November 7.