Soon after Sony launched its latest video game console called PlayStation 4, gamers started wonder how much heat does it produce, because compared to its predecessor, the console came up with some pretty high specifications. To clear things out, we shared an initial PlayStation 4 heat regulation test that included thermal images of the console, and we thought we will follow up with Microsoft's Xbox One console and share its heat regulation test results too, but in all the next-gen hype, we lost track of the follow-up. Fortunately, I recently stumbled upon a post that shows how stable is Xbox One heat regulation using thermal images, and I thought why not share it here. 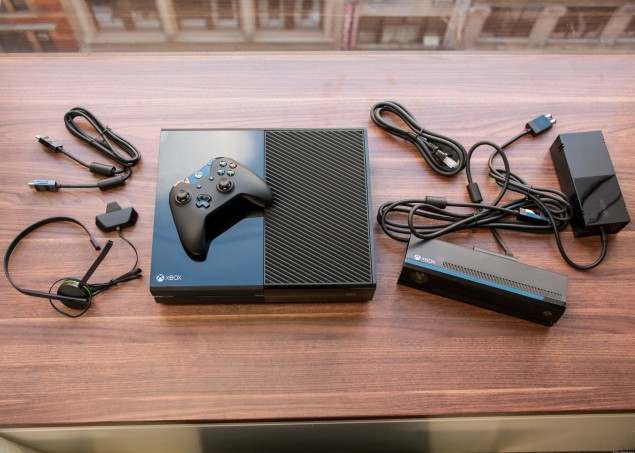 Overheating is one of the last things that manufacturers and users want with their electronic devices. It causes many problems during the development and manufacturing of any electronic device, and during its lifespan. Just like PC gaming, overheating has the potential to cause problems with any video game console, and despite the cluster of ventilation gaps left in the structure of consoles, users still have to be careful about the placement and several other things because when it comes to all-day-long gaming sessions, overheating can cause some major damage.

Apparently the only two video game consoles that gamers care about right now are the PlayStation 4 and Xbox One, and with the competition growing stronger than ever, it has become important to explore every aspect of these two consoles before buying one. Putting Microsoft's Xbox One console to test and finding out how it handles heat, we shared some infrared shots of the console soon after it launched, we intended to do the same with the Xbox One console, but unfortunately we lost track of it. However now, we have some interesting infrared shots showing how the Xbox One heat regulation keeps the console's temperature balanced at all times.

Soon after Microsoft launched its latest Xbox One video game console, Vatche Arabian, a user over at Planet Extech grabbed his FLIR E8 Thermal Camera and snapped some pretty detailed thermal shots demonstrating the Xbox One heat regulation visually. The images show how much heat the next-gen console outputs during everyday tasks like gaming, updating, running programs and watching TV.

The images display how the Xbox One heat production changes with time and how much heat users can expect from their console while it is lying at different angles. Temperature shown in the pictures ranges from about 60º F to 120º F, which is a stable temperature condition for the gaming consoles. Going into the test, we can expect a little bit of difference in heat production between PlayStation 4 and Xbox One, given the fact that Microsoft's latest console comes with an external power brick, which means less heat generation within the main body.

The Xbox One heat regulation test starts with the console lying flat on a smooth surface running the firmware update shortly after unboxing. The first image given below was taken after the console had been running for 5 minutes. As you can see, the console's main ventilation is on the top right side of the unit, and few minutes after the power on, it heated up to 86.2ºF/30ºC. Note that due to the left side of the Xbox One being highly reflective, the readings are not completely accurate. 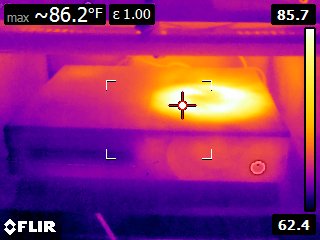 The temperature of the external power brick of the console is around 65ºF/18ºC after about 5 minutes of operation. The brick has vent holes that push air through them so the heat exertion remains pretty moderate. 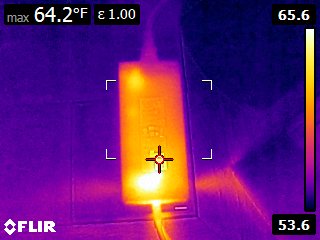 Similarly, the rear end of Xbox One also has heat regulation vents, so in the image given below, you can see that there isn't much heat coming out from the rear of the Xbox One. 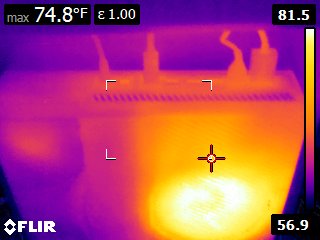 After logging in and watching the intro video, the Xbox One's temperature is now reading around 90.1ºF/32ºC. 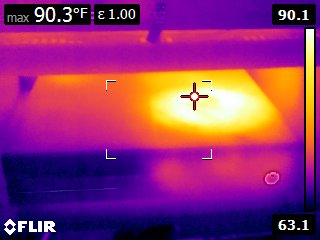 Going through the introduction stuff, the external power brick has now warmed up considerably, reading 82ºF/28ºC. 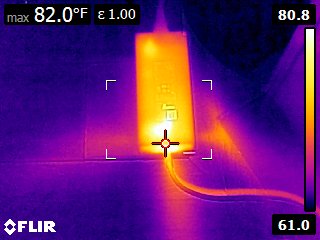 In the image given below, you can see that the power brick is now reading around 86.4ºF/30ºC, this is after starting the Dead Rising 3 initial mandatory install. Note that the power supply has been placed upside down to give you a better look at the defined thermal gradient forming due to the vent fans. Make sure your console's power supply sits right side up, as the vents work more effectively that way. 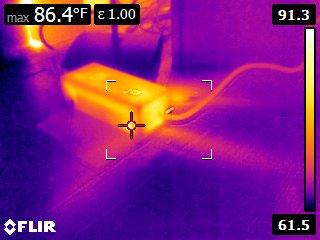 The Xbox One Kinect is reading around 94.3ºF/34ºC, while sitting idle during the Dead Rising 3 first setup install. 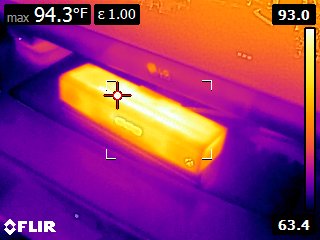 The console itself is still holding at around 90ºF/32ºC after Dead Rising 3 has finished installing. 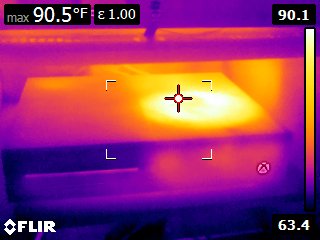 The Xbox One has now been running continuously for about 3 hours, almost 2.5 hours past of Dead Rising 3. The vents are now reading around 110-114ºF/43-45ºC after about 10 minutes into gameplay. The image given below shows the top main vent is reading 112ºF/44ºC after about 2 hours with Dead Rising 3 in action. 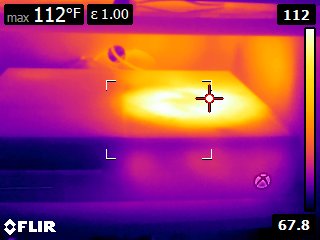 This is a more direct view of the main vent. The image was taken a little bit later than the one given above, and now you can see, the temperature is around 115ºF/46ºC. 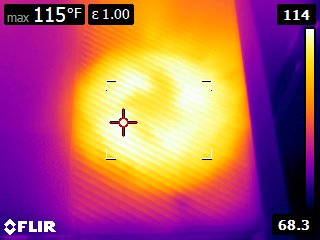 Another shot of the rear end of the console, which is again fairly cool due to the vents. However, the power and HDMI ports become warmer over time, with max temperature reading 98ºF/37ºC. 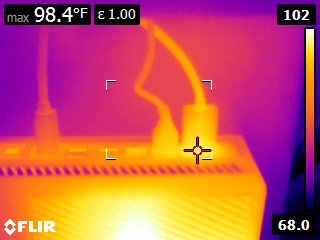 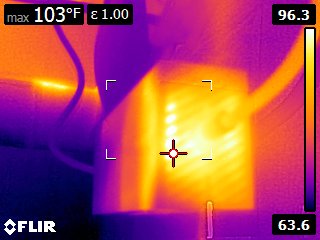 The top of Xbox One Kinect sensor is now reading around 101ºF/38ºC. 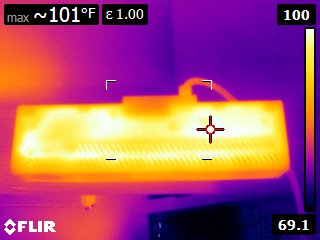 The rear end of the Kinect sensor also holds the temperature down. The warmest part reads around 98.4º/37ºC. 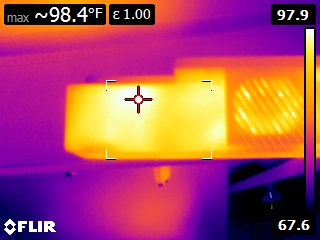 On receiving some requests to show how is the Xbox One heat regulation while TV is being watched via its HDMI input port, Arabian took some shots of the console, power brick and Kinect showing how the heat is managed. In the image shared below, you can see that the Xbox One is reading around 97.5ºF/36ºC after 1.5 hours of TV viewing. 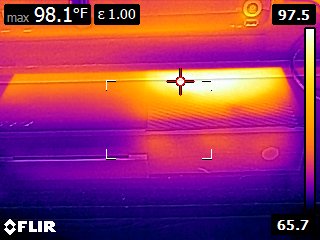 The power brick is back to its normal temperature, which is around 83ºF/28ºC. 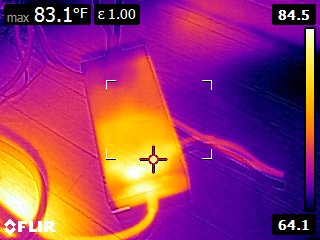 However Kinect is still showing up pretty hot at around 108ºF/42ºC. 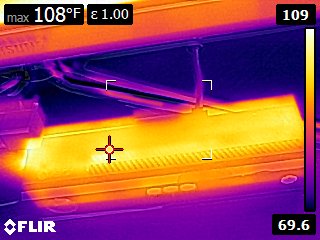 In conclusion, the temperature of the console depends on its positioning as well as the actions it performs, obviously, the console heats up considerably while gaming but while watch TV, the readings stay close to normal. This Xbox One heat regulation test shows that the console runs about 15º-25ºF/10º-14ºC cooler than the PlayStation 4, this is mostly because Microsoft decided to ship an external power brick with the console while Sony made it internal on the PlayStation 4.