Several reports that The Witcher 3: Wild Hunt  has undergone a graphical downgrade have been making rounds over the past several weeks. Since the game's leaked footage was made available courtesy of certain retailers breaking the release date, people have been comparing the console versions with the PC pre-release footage and claiming that the game has undergone a visual downgrade.

With the first reviews being available yesterday there have been several high quality videos and screenshots, showcasing the gorgeous PS4 version, which does indeed look spectacular and far from downgraded.

Reddit user killthealias compared some pre-release screenshots to the PS4 retail version of the game. Certain assets in the PC build are obviously of much higher quality, such as tessellation and higher resolution textures, but the PS4 version does hold it own quite well. killthealias also applied some color correction to the PS4 screenshots, and even though this might not appeal to everyone it does provide an interesting touch. 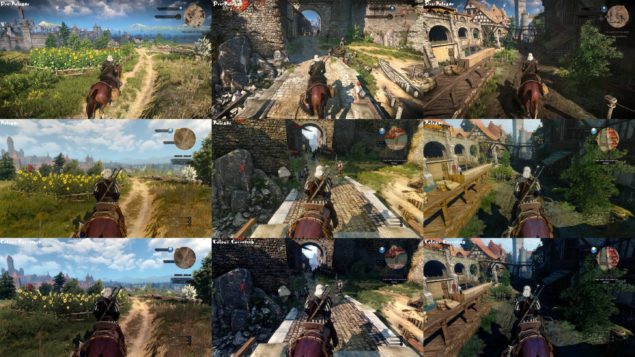 The obvious downgrade since the 2013 reveal is quite apparent, and no one can debate that. That was of course back when the developers were not fully aware of the capabilities of the current gen consoles and were just demonstrating their vision for the Witcher 3. The goal was not attainable, at least not with the scope they had planned for The Witcher 3. Recreating that high level of visual quality for a huge open world like the one in the Witcher 3 was simply not within CD Projekt's budget, and especially not within the capabilities of the consoles.

Regardless The Witcher 3, has definitely turned out looking great. The game has been receiving rave reviews and praise from most major publications and hopefully will do good enough to give the incredibly talented team at CD Projekt RED, a much deserved appreciation and the means to accomplish their future endeavours with even better results.

Nvidia has made available the first screenshots from The Witcher 3 that demonstrate Nvidia features like HairWorks and HBAO+.

The Witcher 3 is less than a week away from release, and as we have previously covered, CD Projekt has already announced that pre-load options are already live, as well as the unlock times for The Witcher 3.