Windows 10 USB Installers And U Drives Have Leaked; Take A Look

Microsoft's Windows 10 is perhaps the company's most hyped about operating system upgrade in recent times. And rightly so. After all, with Windows 10, Microsoft intends to make Windows an entirely new platform, which fully caters to cross device functionality, something which will make Windows device go a long way indeed. Courtesy of various leaks and rumors so far, we have a fairly good idea of what Windows 10 will be offering on the software platform, and if you're looking to upgrade to it as soon as it hits the shelves; we've got you covered there as well. Windows 10's retail U-Drives have just been spotted and you can take a look at them in their full glory below.

We've managed to get our hands on several Windows 10 retail USB installers and U Drives, and for anyone whose hyped up about Microsoft's upcoming operating system, you can take a look at them in their full glory. The first of these is courtesy of Paul Thurman, whose been quite active in the Windows 10 sphere over the past couple of days. Paul says that the USB Installers were provided to him by Microsoft, and he'll get around to giving them a run quite soon. Microsoft seems to have a good design team at hand when it comes to USB installers, with the drive appearing very simplistic indeed. 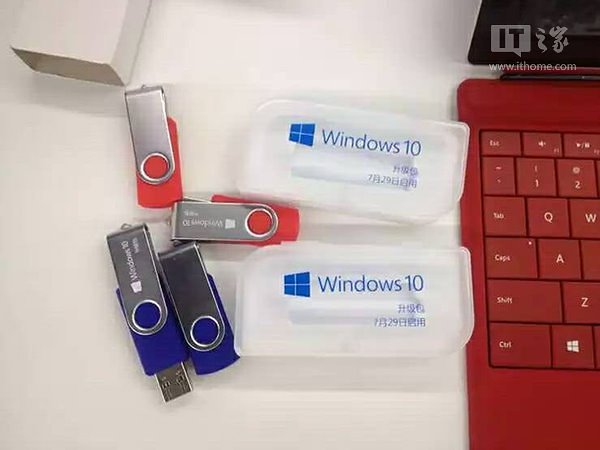 The second is courtesy of folks over at China, who have also managed to get their hands on some U Drives of Microsoft's upcoming operating system. They're not as aesthetically appealing as the one received by Paul, but they do come in two colors, namely red and blue. If you're wondering what's that Chinese text at the bottom, it reads: "Windows 10 upgrade Package. July 29 is enabled" Given that its different from the one shared by Paul, we might suspect that the above U drives are for upgrade purposes and are provided with devices, rather than sold as a separate package. We'll find out soon enough. Stay tuned and let us know what you think in the comments section below.