WhatsApp is one of the most widely used internet messaging app on the market. Even though the competition is tough, users seem to adopt the platform as their primary source of communication. Over a year ago, there were reports claiming that WhatsApp was looking its way into introducing peer-to-peer payment system. Now, some screenshots have been surfacing around the internet, all of which points to the online money transfer system. So let's dive in to see some more details on the matter.

As we have mentioned earlier, WhatsApp could potentially launch its peer-to-peer money transfer service soon. Latest on the subject details some screenshots that reveal a list of Indian banks which will support the service. As can be seen in the WhatsApp screenshots, the service will make use if the Unified Payment Interface or UPI. UPI is an instant payment system developed by the National Payment Corporation of India that aids in the transfer of payments from bank to another.

As for who regulates the UPI platform, the Reserve Bank of India takes the cake in that regard. All in all, the point is to transfer money from one bank to another. The aforementioned service is also used by Truecaller that debuted peer-to-peer payment transfer in India. 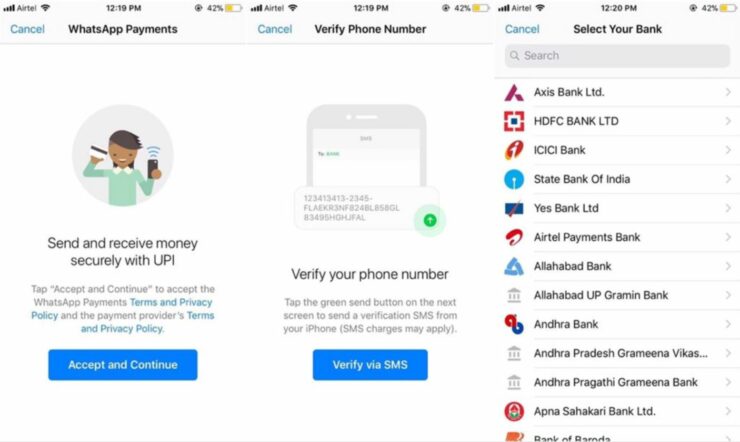 As for the WhatsApp app and the steps involved to complete the procedure, there isn't any rocket science involved. The popular internet messaging platform's UPI setup process involves only a few steps. Once you are through with it, you can start transferring money to other WhatsApp user's bank accounts. Presumably, the online or peer-to-peer money transfer capabilities could potentially be ready in the first quarter of 2018. At this stage of the year, it seems the launch is closer than we may think.

In addition to this, there is no word whether the company is interested in adding the peer-to-peer money transfer functionality to other regions. Moreover, no official launch date is listed as well, so we will advise you to take the news with a pinch of salt. There will be more to the story, so be sure to stay tuned in for more.

Since WhatsApp was acquired by Facebook some time ago, the introduction of the money transfer feature is not at all a new thing. This is due to the fact that the company has also added more or less the same feature in its Messenger app as well.

This is all for now, folks. What are your thoughts on WhatsApp integrating peer-to-peer money transfer service in the platform? Share your views in the comments.