If you’re like me, you prefer to take your time admiring the work of art that almost every new gadget nowadays is, and trying to fathom all the work that went into achieving that level of detail. The process of making a perfect device really is a wonder, and Valve proves it with this new video where you get to witness the process of putting precisely incised components together to fashion one refined piece of gaming hardware. Each Steam controller that currently exists on the planet has been through an exceptional process of manufacturing, neatly handled by Aperture Science robots, and Valve's new video shows how its done. 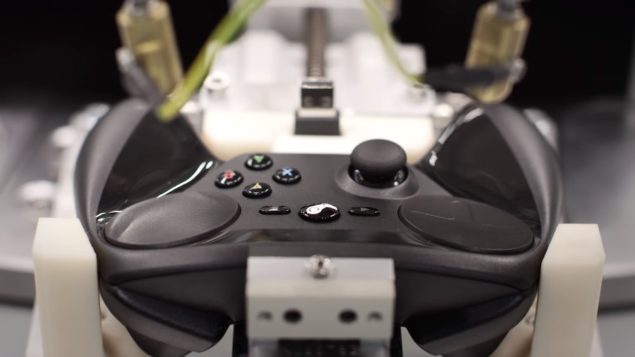 With the dedicated hardware for Valve’s SteamOS operating system gradually rolling out, the demand for its highly customizable game controller is growing bigger. Valve’s Steam Controller isn’t much like anything else on the market right now, its joypad design is unlike any other controller's, and in this recently released video, developer, publisher, and now hardware manufacturer Valve shows how the manufacturing process for Steam Controller is also unlike any other game controller.

The dual-trackpad controllers are built in one of the largest entirely automated assembly lines in the United States, and the process is efficiently handled by Aperture Science robots themselves. It is quite mesmerizing to see the twirling robotic arms fix everything neatly in place. Valve explained why instead of keeping things usual in the assembly facility for Steam Controller, the company decided to go with a whole new level of automation, saying:

“When we first started designing hardware at Valve, we decided we wanted to try and do the manufacturing as well. To achieve our goal of a flexible controller, we felt it was important to have a similar amount of flexibility in our manufacturing process, and that meant looking into automated assembly lines. It turns out that most consumer hardware of this kind still has humans involved in stages throughout manufacturing, but we kind of went overboard, and built one of the largest fully automated assembly lines in the US.”

However, Valve says GLaDOS hasn't taken over everything yet, so the Steam Controller assemble facility does have a human crew as well to ensure humanity’s supremacy over machines."We aren't crazy though," Valve adds, "so humans are still on hand to keep the robots from becoming sentient." Watching Steam Controllers being assembled in such a neat and rhythmic fashion makes me want to pick up one right now. Check out some screenshots below that I took from the video, just for the sake of the level of precision involved:

Epic Games Store Players Up, But Spending Flat in 2020, Catalog to “Rapidly Expand” in 2021