Assassin’s Creed Syndicate PC has been plagued by SLI-scaling issues, and at the moment of writing, Ubisoft’s latest AC title isn’t playable with two (or more) GPU’s.

For those interested in playing Assassin’s Creed Syndicate with the use of more GPU’s, we’ve some good news.

As reported by website DSO Gaming, Ubisoft will be releasing a patch to fix SLI-scaling issues “soon”.

Replying to a ticket made by a AC Syndicate player, Ubisoft’s community representative ‘UbiSmarmy’, stated that the upcoming patch will fix the SLI issue that has been reported.

For the initial ticket and the reply, check out the screenshot down below. 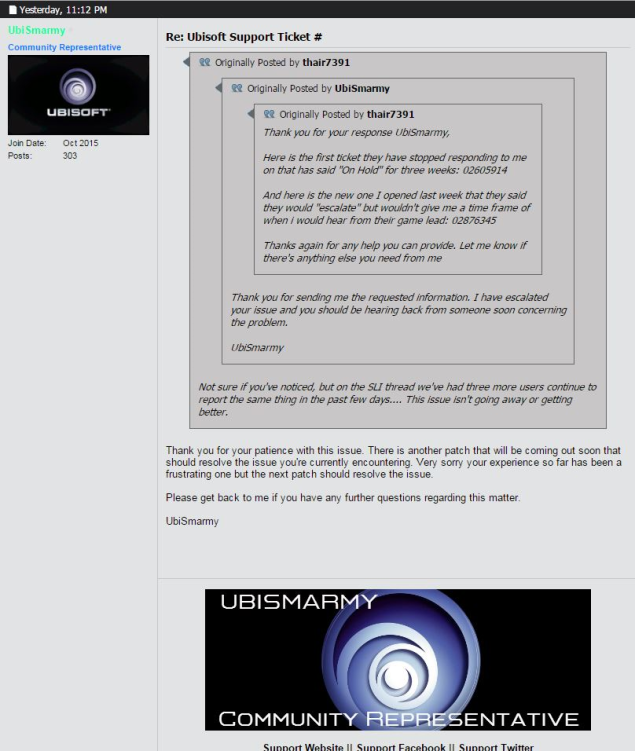 Developed by Ubisoft Quebec in collaboration with eight other Ubisoft studios*, Assassin’s Creed Syndicate is an epic single player experience set in London during the height of the Industrial Revolution, an incredible age of invention that transforms the lives of millions. During this time, the gap between the poor and the rich expands exponentially, making workers’ lives little more than legalised slavery. The lower classes fight for survival by forming a new kind of family – gangs – and adapting to life in the criminal underworld. Players will embody both Jacob Frye and Evie Frye, twin Assassins raised to follow the Creed. Jacob, a determined, hot-headed and rebellious leader of an underground gang, is vastly different than his sister Evie, a master of stealth and control. Together, Jacob and Evie team up to challenge rivals, plutocrats and Templars alike to free the masses from poverty and corruption, and, ultimately, wrestle back control of London.

"The ability to lead an underground gang, commandeer any vehicle on hand and use modern tools to take on an expansive and fast-paced Victorian London sets this game apart,” said Marc-Alexis Côté, Creative Director at Ubisoft. “Assassin’s Creed Syndicate has been in development for more than two years and this new modern take on the living open world will please Assassin’s Creed fans and newcomers alike.”

Assassin’s Creed Syndicate was announced back in May of 2015 for PC, PS4, and Xbox One. While the console versions launched back in October of 2015, the PC version launched in November of 2015.