[Update] Trailer's now out. You can check it out below.

[Original Story] Uncharted 4: A Thief's End, the latest entry of the series developed by Naughty Dogs, is getting closer to release, especially now that the game has gone gold, so it's not surprising to see Sony and Naughty Dog to promote the game as much as they can. A couple of recent reports have revealed that a new trailer is being shown before the highly anticipated movie Batman VS Superman.

According to NeoGAF user william_557, the new Uncharted 4 trailer has been shown in Australia at a midnight screening of Batman VS Superman. The trailer is made up of several different scenes, some of them already shown in previously released trailers.

Another user called jett has reported he watched the new Uncharted trailer before Batman VS Superman. According to jett, however, the trailer didn't feature any CGI.

I saw a trailer for this game at the movie theater when I went to watch Batman Bin Suparman. First time I see a video game ad at the movies in my country.

On a related note, some new small glimpses of Uncharted 4 gameplay have surfaced online in a new video ad. Reddit user Askiles has managed to capture a screenshot of the ad, which you can find below. 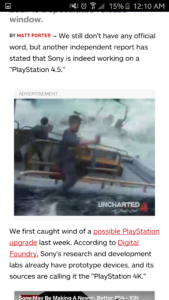 Uncharted 4: A Thief's End launched on May 10th exclusively on PlayStation 4.