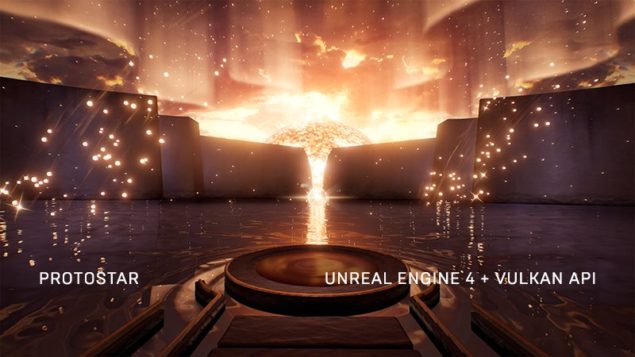 During today's presentation of the new Samsung Galaxy S7 Edge, Epic revealed ProtoStar, a tech demo made with Unreal Engine4  and Vulkan API.

Epic also provided a list of the effects used in ProtoStar to push mobile graphics even further:

You can check some of these effects in the video above, while another video embedded below has some of the developers talking about ProtoStar.

The demo is the result of a collaboration between Samsung and Epic. Niklas Smedberg, Senior Graphics Programmer at Epic Games, said:

We wanted to set a new bar for real time graphics on mobile with ProtoStar. We want to stay in the chip, we don't want to go out to RAM  all the time. Vulkan has in the API support to actually keep the rendering in the GPU and making it really fast.

The idea behind Vulkan is a really, really robust increase in CPU performance. That allows us to render many, many more objects on the screen of the mobile device than we could in the past. When we think about higher levels of interactivity, more dynamic moving objects, more things on screen that are not static - that are actually reactive to the touch and to the viewer, that was the capability of the device that we were certain above all else we needed to take advantage of.

He also praised the hardware performance of the new Galaxy S7 device:

The best part of working on this ProtoStar demo is that it surprised us. There's so much more power here than we've ever been able to take advantage of in the past. We've got a new hardware on the horizon that's an order of magnitude beyond anything we've seen and Unreal Engine is free. This is exciting and we can't wait to see what people will do.

Just a few days ago, we reported ARM's prediction of mobile hardware overtaking PlayStation 4 & Xbox One in performance by late 2017. One thing is for certain, they're certainly trying to do that as fast as possible.