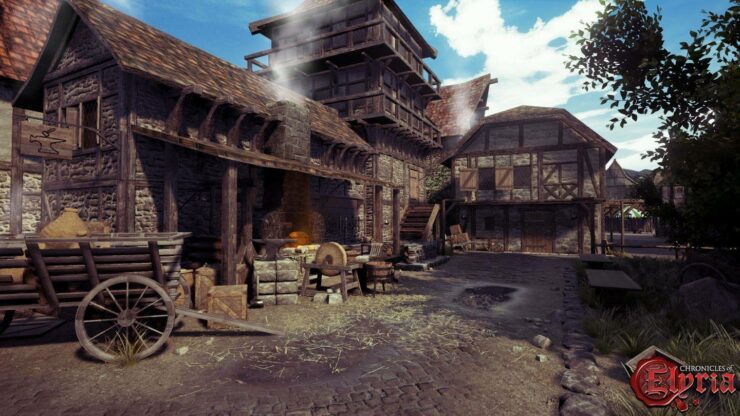 In just about ten days from the opening, the Unreal Engine 4 powered fantasy MMORPG Chronicles of Elyria met the minimum funding goal of its Kickstarter campaign at $900K.

This went beyond the most optimistic estimations of Soulbound Studios, which thanked all the backers profoundly. With twenty days still to go before the end of the campaign, it's time to move onto stretch goals (KickTraq is currently projecting a trend of about $2.4 million) and Soulbound chose a peculiar approach. In order to avoid the infamous feature creep which plagued many games funded on Kickstarter, the team decided to let the backers vote on a mix of additional backer rewards and cut features that might be reintroduced for the launch of Chronicles of Elyria.

Here's a list of the features that are part of the poll.

Wards of The State
Wards are a feature that allow players to create characters separate from any family, in exchange for additional character customization. We cut this because while it's nice to have, it's always possible to create a character from an NPC family and then go about playing the game as you'd planned.

Social Activities - Gaming/Gambling
We'd long wanted players to gather in inns/taverns and play dice and card games. However each game has its own overhead as we have to develop new assets, a few new animations, and the rules for each of the table games. That all said, we still think this is an awesome feature and we hope you guys agree.

Heirlooms
Heirlooms are any item of high quality that a player passes from themselves to their heir. Each generation the item becomes more a part of their family, until eventually characters develop a sixth sense for the item, allowing them to easily track its location for recovery. Eventually, heirlooms may even bestow a curse upon any non-family members who happen upon the item through deviant means.

Digging & Burying (aka. Anything is a Container)
This system evolved from being about digging holes and hiding things in the ground to eventually being about hiding anything, anywhere. The system would allow you to hide things in tree trunks, in a book-safe, or even inside of a pastry. This ties in heavily with the new Search feature we're working on and could add a ton of new RP and surprise elements to the game.

Sensory Map
While we wanted a UI element or visual indicator of sounds and smells, the feature was cut as being non-essential. Without it, and without a mini-map, players will have less information about what's going on in their environment and will have to rely more on what they can actually see and hear as players, rather than what they can see, hear, or smell as characters. That said, there's some cool side-effects that come from being able to sniff out a corpse, or hear a trap re-loading, etc. Feel free to suggest it returns.

Mounted Combat
Yep. We had to cut mounted combat. Combat as we've implemented it uses stances and techniques with various weapon sets. The addition of Mounted Combat means we not only must double the number of animations, as we need mounted versions as well as unmounted, but in most cases would need to create whole new stances. Plus, jousting would add additional mechanics around movement speed and targeting. In the end, we thought this would be an amazing feature, but cut it to fit within $900k. Feel free to add it back.

Integrated VoIP
There's pros and cons to having integrated VoIP. At the end of the day though, this is a survival game and the time it takes you to alt+tab to activate/configure a chat client could mean your death. We'll let you make a final decision on how important this feature is.

Vehicle Customization
Our original plan was for anything above a single-player mount to be configurable to some degree. ie, determining whether a wagon would have shields on the outside, or attach points for other things. This would also mean being able to trade seats for storage boxes, etc. Without it, it would require a different pattern to create a different type of vehicle more like what you're looking for.

Tunneling
This is our system for creating underground grottoes, caverns, mining shafts, etc. It's one of our favorite systems and we're looking forward to adding it to the world. However, it was deemed a painful but possible cut as it's non-essential to have underground lairs, etc.

Natural Disasters
Earthquakes, avalanches, tornadoes, hurricanes, forest fires, and landslides. These all add dramatic story opportunities to the world. Each one requires a good amount of work however, and so was cut in an effort to keep us under $900k.

Other features included in the poll are Mac/Linux and VR support. Chronicles of Elyria should be available for PC in Q4 2017, though the developers are also considering consoles like PlayStation 4 and Xbox One.