GDC 2016 has been over for a while, but a lot of folks who were not able to make it to San Francisco have been waiting to get their eyes on the countless interesting presentations.

Yesterday, the GDC Vault finally posted all those presentations (you can check all the free ones here; for the others, you'll need a subscription). The one we'll be talking about in this article is Rendering Rainbow Six Siege, hosted by Ubisoft Montreal's Technical Architect Jalal El Mansouri.

El Mansouri began by outlining the tech mission Ubisoft Montreal set for Rainbow Six Siege. The game needed to run at 60FPS (or more on PC) across all platforms, despite the environmental destruction that was key to the gameplay.

Ubisoft also wanted to render the game at a higher than 720P resolution on consoles, which were the production's focus, while providing a strong PC version that also allowed 4K support at a decent frame rate. 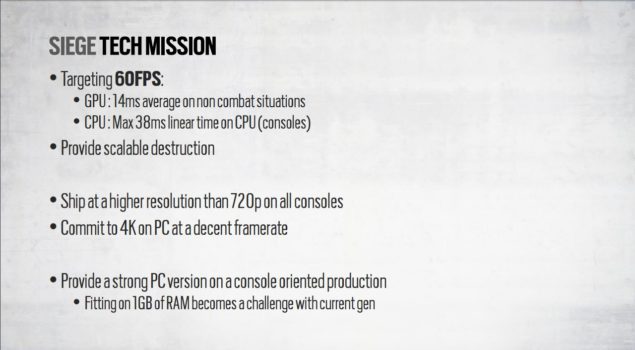 In order to do that, Ubisoft Montreal used the checkerboard rendering technique where the image is split into smaller squares. This allowed them to solve aliasing issues as well as getting more visually pleasing results (including a better peak signal-to-noise ratio) while maintaining that 60FPS target. 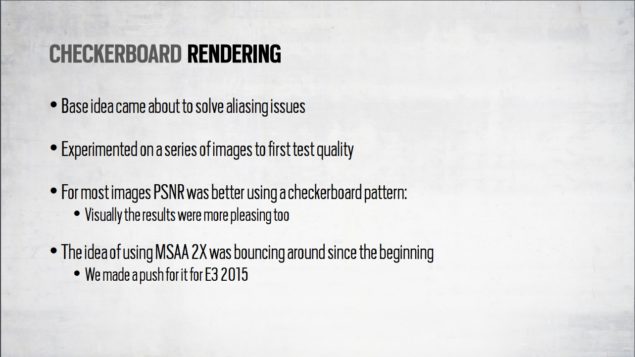 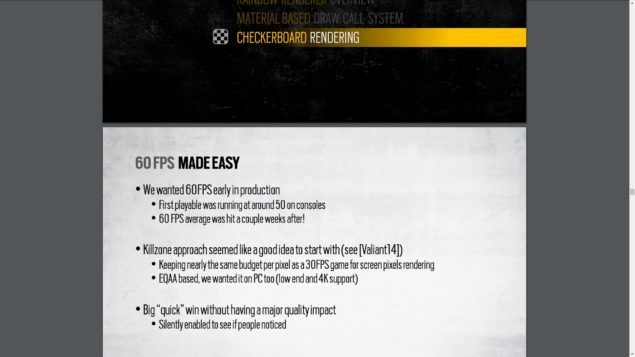 As mentioned in the headline, according to Ubisoft this approach allows developers to fit "a lot more stuff in the ESRAM". This is particularly important because the ESRAM (embedded static RAM) has been often criticized as one the weakest points in the Xbox One hardware due to its limited memory size (32MB). 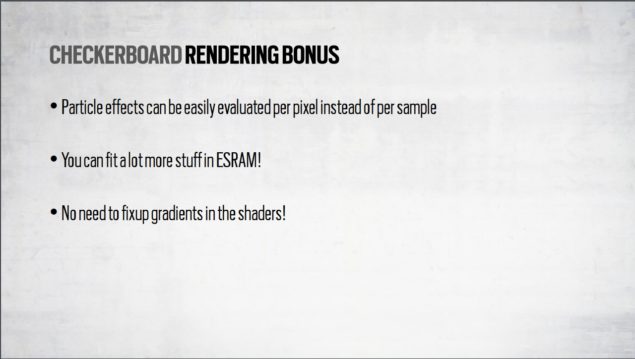 It will be interesting to see if other developers, following this GDC 2016 presentation, will use the same approach to try and fit more in the ESRAM while developing their Xbox One games.

Finally, El Mansouri concludes that the checkerboard technique was a good win for Rainbow Six Siege and the team will try to push more quality per pixel in the future, suggesting that the graphics quality of the game might improve via updates. 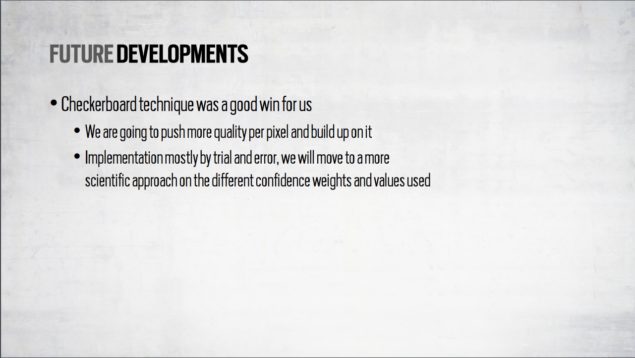 After all, Siege seems to have found its niche and Ubisoft has many more patches and DLCs planned for the game to keep it relevant in the coming months and even years. You can read our review here, by the way.