It would appear that the RX Vega family is drawing ever closer to release but still hasn't finished the production processes. We have previously spotted early RX Vega boards passing RRA certification, specifically the "D04" variant, but just yesterday two more variants cleared RRA certification and at least one of them appears to be a flagship GPU. The "D05" and "D15"  Vega boards have received clearance from the Korean radio authority which means that they have arrived to the end of the development life-cycle .

The RRA certification is something all consumer ASICs have to go through in South Korea - just like in the US. Unlike the States however, RRA publishes its certifications in the public domain, and two brand new boards from AMD were just recently certified. Interestingly, we have not seen this board before on Zauba, but this is almost certainly an RX Vega product - how do we know that? Let's find out.

AMD uses a predictable nomenclature for naming its test boards. Previously, all of these boards started with the letter C followed by five numbers. However, the CXXXXX lineup has reached its end with the Polaris family and logically speaking, the company can now move on to the DXXXXX nomenclature. The first digit after C almost denotes the relative power of the graphics card. The numbers that follow are much harder to guess at externally and can depict any specification whatsoever. Since the numbering follows a very obvious trend however, its not that hard to figure out how AMD builds the lineup. Before we go any further, take a look below.

Hawaii boards were named C6XXXX, Tonga boards C7XXXX and Fiji boards C8XXXX. In fact, if we are being specific about it than the exact code names were:

By the same logic, Vega boards should have the DXXXXX nomenclature, and this is something we have already seen before. Now take a look at the certifications issued by RRA: 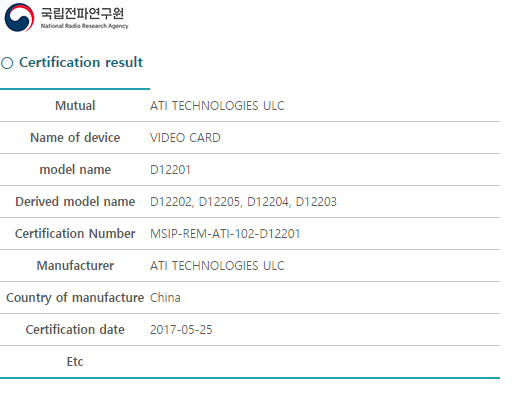 The first certification is for the "ATI-102-D12201" board which includes a range of families within this nomenclature. The naming scheme implies that this is the larger Vega variant that we have seen to date and could quite possibly be the flagship product. It is of course impossible to say with 100% certainty which Vega product this certification corresponds to, only that it is a Vega graphics card. 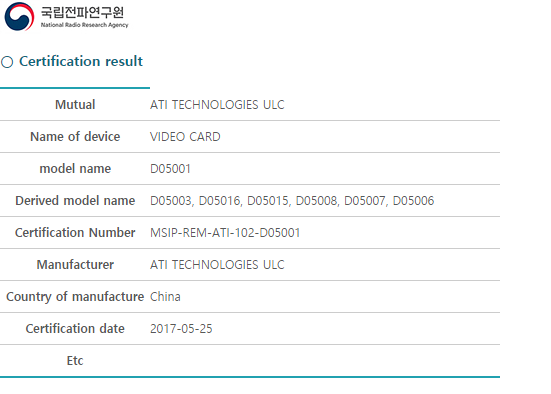 The second certification is  of the "ATI-102-D05001" board which appears to be similar in nature to the D04 board we have previously seen being certified by the RRA. If each of these boards conform to a Vega variant then we have (so far) seen 3 different variants get certified by the Radio Authority. Going by nomenclature, this appears to be a cut down variant of the RX Vega lineup. Once again, it is impossible to know for sure which particular Vega variant this board conforms to.

With a single precision compute of 12.5+ TeraFLOPs per second on a GPU with 4096 cores, and considering TeraFLOPs is a function of Clock Speed * 2 Instructions Per Clock * Cores, you are looking at a RX Vega 10 graphics card that needs to be clocked at roughly 1526 MHz. Considering the fact that the already revealed MI25 is passively cooled it should be able to achieve this mark in due course and even exceed it. The specifications mention the HBM2 stack with 512 GB/s of bandwidth but this is listed as 16 GB. We already know from the RX Vega Doom demos that the product will have a total vRAM of 8 GB so this is probably only relevant for the server market. The card will consume 225 Watts of power.

The RX Vega GPU is stated as being manufactured on the 14nm FinFET node which means you are looking at primarily GlobalFoundries based chips here (with Samsung based chips as required under the amended WSA). It will be shipping with 8GB of HBM2 memory with a 2048-bit bus width.