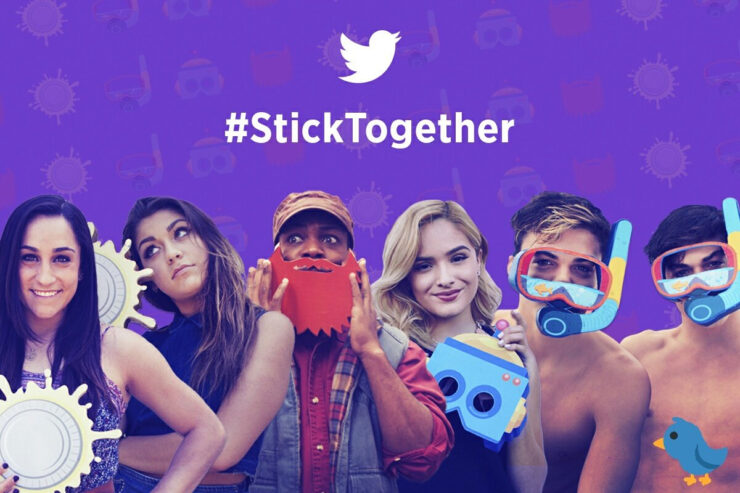 Twitter is up to something new despite its slow revenue growth since it went public back in 2013. Starting today, Twitter is rolling out new Snapchat-like stickers for iOS and Android. The feature was first announced in June, that lets users apply custom made stickers and cartoons in order to customize photos before you finally post them. The act brings Twitter a step closer to Snapchat as users place stickers over their photos. Let's see Twitter Stickers in more detail and analyse if we really need them or not.

Twitter Stickers Are Available On iOS And Android Starting Today

So Twitter's stickers let you dress your photos before they are posted on the microblogging service. There are quite a handful of stickers to choose from like hats, masks, food, emojis, sports stuff and many more. Seemingly, they are also available as visual hashtags. This means that when you tap on an emoji or a sticker, you will be presented with stories that constitute the same sticker. This is something new, but definitely not what we mostly need.

Stickers jumped on the popularity bandwagon when they were introduced on the Facebook Messenger and Snapchat. However, those stickers became part of conversations allowing users to express more than just words. Most probably, due to below expected revenue, Twitter will look forward to monetize its stickers through brands. Brands would have to give cold hard cash in order to add their own stickers.

Connect your photos to the world with a visual spin on hashtags: tap #Stickers to peel back a fun new way to search. pic.twitter.com/YVy7r53Nja

Nonetheless, if you're interested in customized stickers for your photos, Twitter will just provide them to you. Twitter will place a tiny smiley icon on the bottom right hand side of the photo that you wish to attach. Hitting the small smiley option will show you the available stickers. Stickers are categorized which will allow you to easily find the appropriate one for your photo.

We're not sure if adding stickers to the site is diluting it or enhancing it. Yes, it would be best for the company to generate some extra cash, but the approach does not seem to be a game changer. We're already using Stickers on Snapchat, Facebook Messenger and other networks. Other than this iOS 10's Messages app will be incorporated with sticker use as well. It would have been great if the company added a productivity feature for individual users and businesses.

So what do you guys think about Twitter Stickers? What impact do you think will this have on the company's revenue structure? Share your thoughts in the comments.