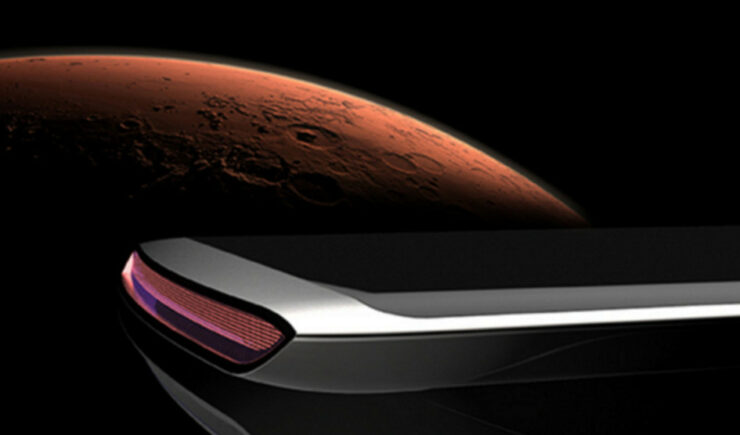 Smartphones have become truly powerful but rivaling notebooks is something that is yet to happen. However, Turing Cadenza might come very close to their performance and it’s because the specs leaked to be present inside is beyond our comprehension.

Turing Cadenza is going to sport a 5.8-inch QHD display, but the fascinating thing about the hardware present inside its chassis is far too good to be true, or is it? Starting off, the smartphone is going to feature not one, but two Snapdragon 830 SoCs. If you haven’t heard about Qualcomm’s upcoming Snapdragon 830, it’s going to succeed both Snapdragon 821 and Snapdragon 820, and it is going to be manufactured on the 10nm FinFET node. A single Snapdragon 830 will pack more than sufficient firepower, so imagine what two chipsets inside a device would be able to accomplish?

Additionally, Turing Cadenza has also been leaked to feature 12GB of RAM; that’s equivalent to the amount that you find in gaming laptops. The 12GB RAM hardware spec is slightly believable. With phones coming with 6GB of RAM, it is not that hard to imagine that Android phones coming with 8GB of RAM is going to be a common sight from 2017. Unfortunately, most manufacturers give too much attention to the hardware than its software, which is exactly the reason why 8GB of RAM will end up becoming nothing more than a waste. 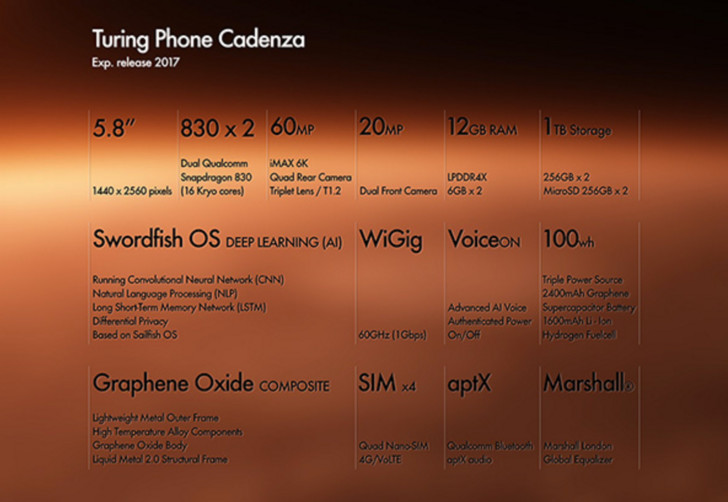 However, this phone is not going to be running Android, but an OS based on Sailfish called Swordfish. There’s also 60MP rear camera sensor, along with two 20MP front shooters. Though the 60MP rear shooter is going to be the granddaddy of all smartphone cameras, I am assuming that the aperture is going to be adjustable like those lenses you see on different cameras. The adjustment of the lens will increase or decrease the aperture value, which will allow more light to enter.

For a 60MP rear camera, you’ll definitely need lots of light to enter the lens, and while images will look thoroughly sharp, the 60MP resolution might look abysmal during the night. It is also been reported that the smartphone will provide support for 4 SIM cards, and the ability to hold up to 1TB worth of storage. (512GB worth of internal memory, and support up to a 512GB memory).

If this is an elaborate prank, there is absolutely no mention of it, even on the company's social media accounts. Thanks to an elaborate explanation of a friend, having two SoCs present in a smartphone would be of no use to the company or the users, though its completely doable, but will increase unnecessary costs for the company. The better approach would be to add more cores, rather than for a phone to possess two SoCs. We're not quite sure if the company is doing this for free publicity or not, but as stated before, the specs our beyond belief, because they probably are.

Turing Cadenza has been said to debut during an undisclosed month of 2017. Are these specifications out of this world or what? Tell us your thoughts right away.