Apple Music is gaining popularity in competence with some of the leading music streaming services in the industry. However, users are finding it difficult to reallocate their playlists to Apple's music streaming service. But little do they know about a handy trick that can help transfer playlists from Spotify and Rdio to Apple Music. And we'll show you in a handy step-by-step guide on how to use it.

'Move To Apple Music' is an app that automates the operation to transfer your tracks and playlists from Spotify and Rdio to Apple Music - all this with just a click of a button. The app is exclusive to the Mac and supports the format of your tracks and playlists that is accepted by iTunes. In this regard, the blurb says, “We don’t block your computer while transferring your songs, feel free to use it,” More on pricing and availability will be detailed momentarily.

Migrate Your Rdio And Spotify Playlists To Apple Music

Talking about data access, the app uses the official login API from all services and henceforth, the app will not have direct access to your data. “We use this great library called mitproxy in order to intercept the data iTunes sends to Apple’s server. In that way we can replicate exactly the same request as iTunes would do when you click on ‘Add to My Music’ button,” explains their FAQs. 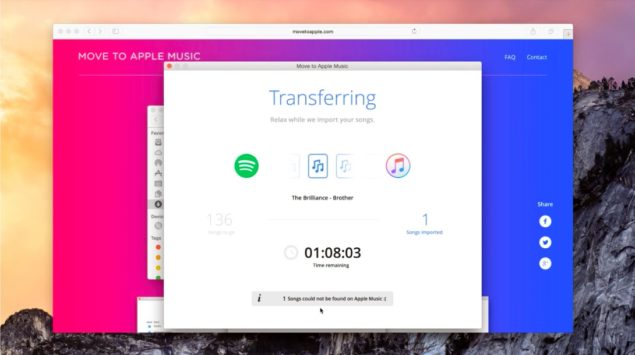 Developers claim that in a period of eight days, their app has migrated over 150,000 songs. Once transacting your playlists to Apple Music from the host music streaming platforms, you will notice a minor 30 second delay between each migration. The delay is part of the migration in respect of the iTunes API. The app is essential for users who wish to migrate their tracks and playlists to Apple Music from Rdio and Spotify.

'Move To Apple' can be downloaded from movetoapple.com. The app is available for purchase via PayPal alone, and costs just $4.99. It's a very useful app designed for easy playlist migration. We would totally recommend you to give this app a whirl and let us know how you guys liked it.

We really wish the app was free though, but hey, the developers need their cup of coffee now do they? Of course they do.