So what appears to be an initial benchmark of AMD's upcoming Radeon RX Vega GPU has surfaced on the 3DMark database (via Guru3D). This entry lists an unknown VGA, that matches the expected specifications of the upcoming RX Vega GPU and is probably an early engineering sample of the same. The benchmark contains the Vega Device ID (687F:C1) and further validation of this leak comes from the fact that this is the same card AMD actually demoed with Doom Vulkan.

Note: The score shown in these benchmarks is not indicative of the final product by any means, as is clear from the massive clock speed difference as well  as the fact that this could be a different die being incorrectly read as the 687F:C1. A cut down variant is also not out of the question.

Before I go any further, the clock speed of this sample is a mere 1200 MHz. This means you are looking at a number of 9.8 TFLOPs and not the performance Raja Koduri promised. With a single precision compute of 12.5 TeraFLOPs per second on a GPU with 4096 cores, you are looking at a RX Vega 10 graphics card that needs to be clocked at roughly 1526 MHz. Considering the fact that the already revealed MI25 is passively cooled, it should be able to achieve this mark in due course and even exceed it. The specifications mention the HBM2 stack with 512 GB/s of bandwidth and we already know from the RX Vega Doom demos that the product will have total vRAM of 8 GB. The card will consume 225 Watts of power.

Remember, AMD usually follows the policy of underpromising and overdelivering, so this is the bare minimum I would expect it to achieve. That said, this also means we have to take this leak at face value, since this major a clock speed difference can swing the results wildly: 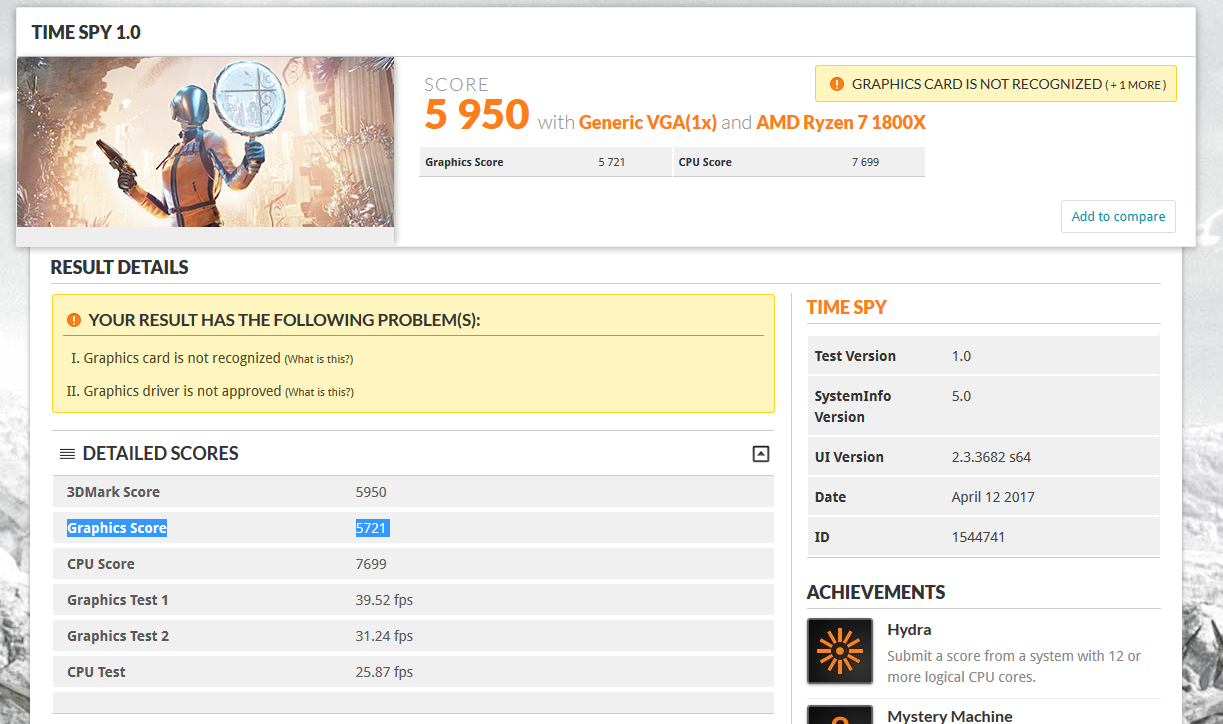 The Radeon RX Vega was tested with a Ryzen 1700X CPU. While the part is undoubtedly an excellent performance per dollar buy, its not something you should use to really push every ounce of performance out of a GPU. Fortunately for us, this is TimeSpy, a 3DMark benchmark, which means we can simply look at the graphics score to compare results (which is usually fairly independent of any CPU bottleneck). At these clock rates, the graphics card scores a decent 5721 points.

This is a decent score only, because this is roughly what a Geforce GTX 1070 would score. In its current state, the RX Vega is not faster than the GTX 1080 and certainly not the 1080 Ti. This is a performance level that is to be expected with a core count of 4096 and clock rates that are aiming to be around 1500 MHz. The RX Vega GPU is stated as being manufactured on the 14nm FinFET node which means you are looking at primarily GlobalFoundries based chips here (with Samsung based chips as required under the amended WSA). It will be shipping with 8GB of HBM memory (type unknown at this point, but it should be HBM2), with 2048-bit bus width.

AMD's troubles with achieving clock speeds the likes of the Geforce GTX 10 series makes me suspect that we are probably going to be looking at an RX Vega that will go, at most, toe to toe with the GTX 1080. Anything else, would be wishful thinking given the evidence given. There is however, one caveat with all of this theorizing. AMD is releasing multiple variants of Vega, and there is a possibility that this particular benchmark is of a cut down chip that is meant to go head to head with the GTX 1070. The device ID used in this case is 687F:C1, and while the first 4 digits are the same, the last digit is actually different from the ID we usually catch: 687F:C3.