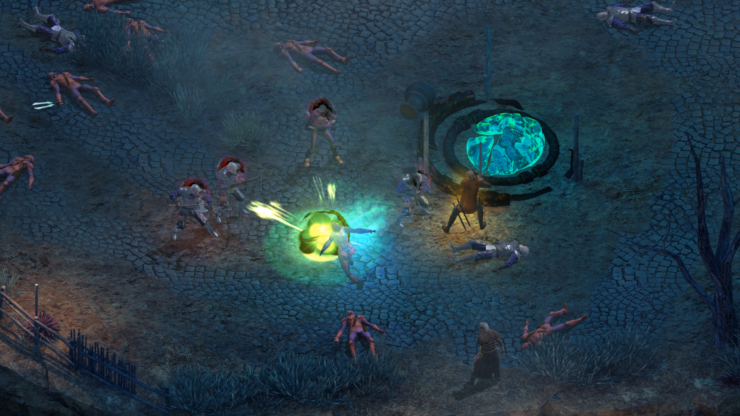 Back in 1999, Black Isle Studios released Planescape: Torment. For those of you who are unaware, Planescape: Torment is widely regarded as one of the greatest RPGs of all time. The folks at inXile Entertainment are taking it upon themselves to try and create a worthy successor with Torment: Tides of Numenera.

At a recent preview event, we were given the opportunity to sit down with Colin McComb and Gavin Jurgens-Fyhrie, two writers on inXile’s Torment: Tides of Numenera. Check out our interview to hear the latest on inXile’s experiences with Early Access, their stance on DLC and more.

Torment has been available via Early Access for about a year now. What was your experience with it? Did it help with the game's development and will you consider using it for your next titles (The Bard's Tale IV and Wasteland 3)?

Colin: Early Access has been a tremendous resource for us. We took a lot of feedback into account, both the large feedback and the small feedback, like for instance, we revamped the entire beginning of the game. There is a sequence that we cut out, repurposed and redeveloped later and essentially streamlined the beginning portion of the game to get you into the meat of the gameplay faster. People were complaining that it was slow, it was sloggy, it was too much coming at you too fast.

When you set out to make the spiritual and thematic successor to Planescape: Torment, one of the most beloved cRPGs of all time, it was no easy task. Do you feel you've accomplished your original goals with the project? Is the final game perhaps a bit different from what you had first envisioned?

Colin: One of the things with game development is that it is always different from what you first envisioned. I cannot think of a single development experience I’ve ever had where it was exactly as we thought it was going to be from the start. That’s the same in pretty much any creative endeavour as well; artists say they make a mistake and have to repurpose the entire painting, musicians have their happy accidents, and we do as well. We have gone through multiple major story iterations, not to mention the smaller iterations as well. That said, I am really happy with what we’ve done. I was actually scared enough at the start of development when Brian Fargo asked me to do this project that I considered saying no, just because, you know, you are following up Planescape: Torment. How do you do that? If you fail that, that’s basically your career. ‘Hey, thanks for shitting over our beloved franchise!’. We assembled a great team, and I guess Gavin is part of that. Wait, let me correct that. Gavin is a crucial part of that. He brought a lot of levity and a level of humour to the game. I tend to write pretty serious, and Gavin brought a much more light-hearted approach. You’ll be playing thinking, ‘Oh, this is so funny’, and then he just dinks the dagger in you, and you go ‘oh my god, he was just loosening me up for the big emotional shot here’.

Gavin: I specialise in nice, fluffy comedy with a sad, chewy centre.

Colin: To get back to your question, I do think we’ve made a worthy companion to Planescape: Torment.

What's the single feature of Torment: Tides of Numenera you think will set the game apart from the rest?

Colin: We were actually joking about this ahead of time.

Gavin: I think the reactivity is something we are really proud of. I’m sure you’ve heard this number a few times now, but there’s over a million words. I think we broke a million just in doing the polish, and coming back to previous conversations and adding in extra layers of reactivity. If you mention a guy across town in a conversation and you look at that and go, ‘oh, hey, maybe I should have some sort of reaction to that’, and I can go over to that character and then they have something to tell me just because I had that one line from that other character across town. We tried to do that everywhere we could. George Ziets is our Lead Area Designer and he has been amazing at this sort of thing. All these questions that are such to a level of detail that make you go, ‘wow, this game would be better if I did this one extra thing’, so let’s open up this conversation again and add this extra stuff. That’s probably been the defining thing for me.

Colin: I think the thing that is going to set this game apart is probably that level of detail, that meticulousness. George’s designs… he’s incredibly imaginative. I created the broad overview of these things and then George got in there and just nailed this stuff. Nailed it so hard, nailed it so well. I think that Sagus Cliffs is going to be held up as a model for how to design cities in the future. It’s just so intertwined and so dense, I think people are really going to respond to that.

Gavin: That’s not even taking to account the backer characters.

Colin: The game launched as a Kickstarter title and we raised four or five times our asking price. Some of the reward tiers allowed backers to create NPCs that went into the game.

Gavin: And yeah, that is tricky. They could come up with a line, they could come up with a few sentences, or they could give us an entire page and we would do our best to fit this into the Numenera world. One person wanted basically Ryu from Street Fighter. Literally, he has the bandana, he has the outfit, everything like that. It was George’s job to take those characters and give them Numenera backing, and link them to all the different quests throughout the zone. George is amazing. He would do that and then hand it over the writers for conversation development. This game would not be what it is without George.

Will our character's physical appearance change throughout Tides of Numenera?

Colin: With like armour sets and weapon sets, yeah. We aren’t going to have, like, ‘go get your haircut’… This is an isometric game. We don’t get into the facial models so much. That isn’t what this game is about, it’s not about playing dress-up, it’s about exploring ‘what does one life matter?’ and other philosophical questions.

Gavin: There is a level of customisation that does happen through dialog. There’s a horrific body-altering surgeon that gives you these terrifying implants. I don’t think they show up but they change your gameplay experience significantly.

To what extent does the player's choice of the male or female protagonist affect the story and world? Does it amount to a simple pronoun change, or are certain quests and encounters locked to one gender?

Colin: There are quests and characters locked to specific genders, but, more importantly, those quests have chain reactions and unintended consequences on major characters in your game and in your party. So if you had taken the female option, for instance, one of your companions will likely change forever. There are very definite consequences to picking one or the other. That said, it’s not like we are going to have the sexist guy come in and tell you to delete your account.

How long will it take the average player to finish Tides of Numenera?

Gavin: And I know a lot of mediocre players.

Gavin: There’s a giant asterisk on that. First of all, this is a game that is designed to be replayed. Like you heard with the gender question, there’s just a lot of content that you cannot see the first time through, you just won’t. There’s that factor of being able to play through it again and getting that enjoyment. It’s the question of reactivity: what happens if I’m in a crisis in one of the battles and I kill a major character that I otherwise would’ve run into again? That’s going to change the playtime significantly, and Torment was designed to do that.

Colin: You can have super-fast runs or you can have really slow runs. It depends on how much you want to explore the world.

Do you expect to release additional content after launch? If so, will it be paid or free?

Colin: The answer is no. We don’t expect to provide additional material necessarily, but if we do it will be free. It is one of the things that as a company inXile are pretty against paid DLC.

Colin: Depending on how well the game does, we may look into adding more content but that will be in the form of support as opposed to, ‘hey guys, come buy some new shoes for The Last Castoff. $49.95!’.

Torment: Tides of Numenera is getting a console release. Does that mean it will support controllers on PC, too?

Colin: We are supporting controllers on PC, yeah. That will turn into the Xbox control scheme, and it won’t change any of the content.

Are you going to support PlayStation 4 Pro and if so, what kind of enhancements will there be? What do you think of the hardware as a whole?

Gavin: I’m not entirely sure about that… we are writers.

The industry is still reacting to the Nintendo Switch reveal. What's your take on the new console and what is the likelihood that you'll support it with your games?

Gavin: I know nothing about the Nintendo Switch. I apologise…

Colin: I don’t know if the hardware would support our game or not. I mean, I would love to do it because we are a PC gaming family at my house, but we do like Nintendo stuff.