This Crazy iPhone 7 Concept Is Far From Reality

You may have seen a lot of iPhone 7 concepts in the past few months, but what we're about to show you is completely something really different. The main aspect of the concept is a wide flexible display for all of you who love their media big. Not that the concept would be implemented, it's just what designers do for what they would love to see on the next iPhone. 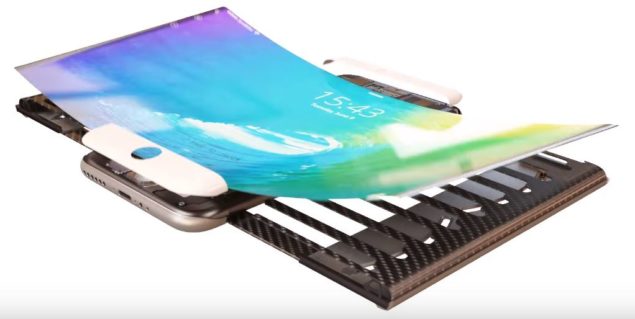 This iPhone 7 Concept Boasting An Expandable Flexible Display Is Crazy!

We really do have to credit the designer of this iPhone 7 concept, since it has been put together amazingly. Designed by Sonitdac, the concept closely looks like an iPhone 6s had a bit of an intimacy with the Galaxy S7 edge. You can see this by looking at the display sides of how they have been carved to make it look like the recently announced Samsung flagship. Nonetheless, judging on the bases of the external hardware, it's by far the exact same design as you would find on Apple's 2015 flagship, the iPhone 6s. Moreover, the iPhone 7 concept is housed by a complete aluminium unibody design, which you would find on the iPhone 6 and iPhone 6s as well.

If it doesn't interest you much, then wait till you guys see what the focus point of this concept is. On the top of the device rests a ''widescreen'' button that would transform it into something amazing. Pressing the ''widescreen'' button would magically expand the flexible screen. The edges of the iPhone 7 concept extend out of their defined shells, which ultimately allows the flexible display to appear. The screen size extends from a standard iPhone 7 to the screen size probably matching the iPad mini.

As we have mentioned before, not that this concept would turn out to be true, it's just crazy to see something like this could take shape. Nonetheless, the designer has not defied the cause and effect rules. The operation of maximizing the display size has been thought by the designer. The flexible display is held by four carbon fiber arms that enables the sides of the iPhone to extend. You can see how the flexible display neatly folds back into its place. The mechanics of expanding the display have been shown in the videos as well.

It's just a well-thought unreal iPhone 7 concept, probably nice to see but does not seem applicable at this level. This is it for now, folks. What are your thoughts about this crazy iPhone 7 concept? Share your views in the comments.