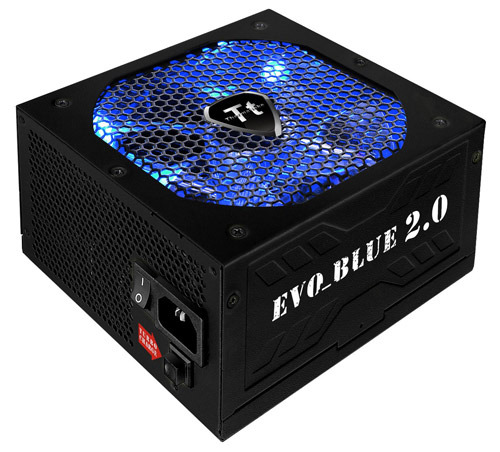 In 2009 with aesthetic design in mind, Thermaltake launched the first gaming PSU series – the Evo Blue which stands out from the crowd with different and refreshing appearance. This fall, Thermaltake launches the next generation gaming PSU series – the Evo Blue 2.0 Series. Evo Blue 2.0 is the world’s first “turbocharged” concept PSU designed for gamers and enthusiasts to take on the growing surge of PC games and gaming hardware.

Thermaltake Evo Blue 2.0 is a modular series feature 850, 750 and 650 watts with 80 Plus Gold certified guarantee to deliver up to 92% efficiency. The Evo Blue 2.0 has a special designed “turbo-charge” push-button that will instantaneously provide an extra 100 watt of power for any special circumstance. To make sure the components are properly cooled, the series has incorporated the FanDelayCool Technology which the fan will continue to operate for another 15-30 seconds after shutdown. Furthermore, Evo Blue 2.0 is equipped with high current single +12V rail for steady and consistent output, high-grade components such as Japanese capacitors and electrolytic to prolong the usage and full low-profile cable design to grant easier cable management.

The Evo Blue 2.0 has a flashy and vivid appearance that comes in black or military green, features a bold and rigid “X” shape with a prominent Evo Blue 2.0 logo design on both sides of the chassis and a large 14cm crystal LED fan to endure the gaming essence. The LED fan is more than a decoration; the color of the LED light is actually an indication of the Evo Blue 2.0’s condition. When it appears in blue means the PSU is in its normal status, and when it appears in red, means the PSU is under the “turbocharged” condition.

With the aim of sustaining Evo Blue’s reputation, the Evo Blue 2.0 has inherited the “X” from Evo Blue. Initially the X is design concept developed by Thermaltake design team to stress the importance of product aesthetic and performance. Today it has become a symbol that illustrates the need to find equilibrium on both design aspects.

Thermaltake Evo Blue 2.0 is definitely the next generation gaming PSU in the market that has the capability to take on the growing surge of PC games and gaming hardware for gamers and enthusiasts.

For more details on the Thermaltake Evo Blue 2.0 information please visit the product pages of: