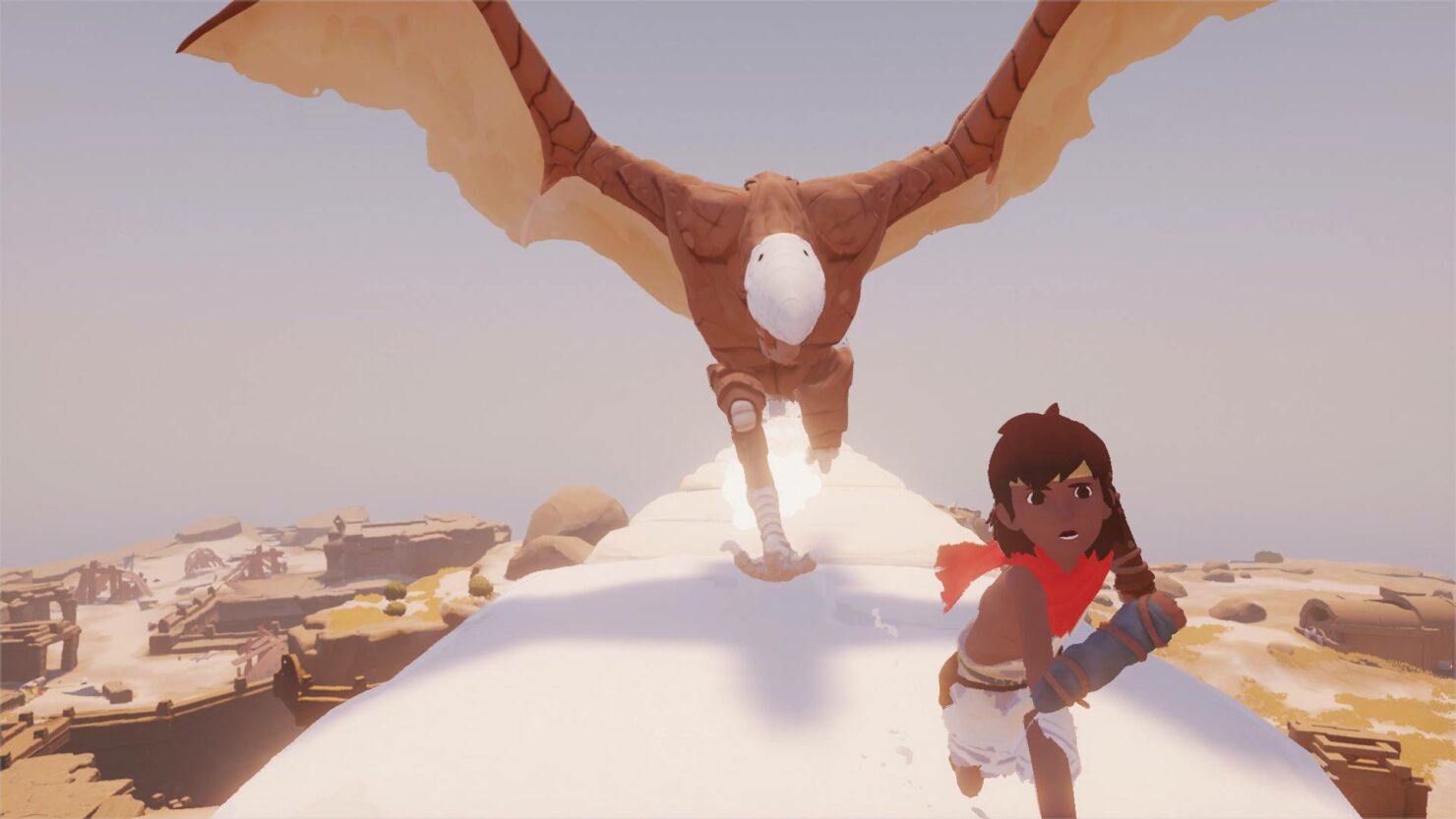 Back at Gamescom 2014, RiME's debut trailer made a huge impression on those who were watching Sony's Media Briefing, either at the venue or online. I was in the audience that day and immediately started looking forward to RiME.

The game dropped into obscurity for a while, though, and there were whispers that the development wasn't going well. RiME started as a PlayStation exclusive, but eventually Spanish studio Tequila Works (whom you may know for Deadlight and The Sexy Brutale) bought back the rights from Sony and then announced a deal with Grey Box and Six Foot to publish it.

It's now scheduled to launch in May for PC, PlayStation 4, Xbox One and Nintendo Switch. We've talked to a few of the key developers at Tequila Works to learn more about this single-player puzzle adventure game. Enjoy!

RiME had to overcome a few troubles during development. Did you make any key changes from your original vision?
(Raúl Rubio – CEO & Creative Director) In fact, in the last couple of years since we released RiME’s second trailer we have focused on returning to the game’s original vision, subtracting all the superfluous elements that weighted down the gameplay. Our objective when we initially conceived the game was to make the character live an exciting adventure through the eyes of an eight year old child, but that also means to embrace his limitations –such a young kid is should not be a warrior, wield a sword or outrun a flying predator! Thus, we dismissed several ideas that actually detracted from what we knew RiME was at heart, like scavenging resources to regain stamina.

What were your main inspirations for the game's art style?
(Raúl Rubio – CEO & Creative Director) The main artistic influence for RiME has been the late 19th, early 20th Century Spanish painter Joaquín Sorolla, also known as “The Master of Light” for his unparalleled ability to capture the Mediterranean sunlight in his paintings –a light that saturates the coast and makes the sea surface come to life. There is also room for Salvador Dali’s use of negative space –in the environment as well as in the puzzles, and Italian architect Giorgio de Chirico’s designs. Of course, nobody can doubt we are huge Studio Ghibli fans!
Would you say the game is more about exploration or puzzles, from a mechanics standpoint?
(Kevin Sardà – Lead Designer) RiME has puzzles on its DNA, but it's not a puzzle game. For us, puzzles are a way to deliver something else; they are never the ultimate goal. Sometimes we use a puzzle to make players stay in a specific area and walk around it to get to know it better, sometimes we use them to introduce a subtle part of narrative, sometimes they can be used as a block to be sure that players visit a specific spot before progressing further... In any case, the most important feature in RiME is the art, the characters and the island itself so, from the design perspective, we encourage players to get off track, explore as much as they want and see everything they can. We don't want players to get blocked or spend too much time staring at a specific puzzle, we deliberately wanted to avoid that.

Will the story be narrated or perhaps told in an unconventional way?
(Kevin Sardà – Lead Designer) Definitely the latter! We don't have dialogue in our game and very few cutscene moments, which mean that all the narrative must be embedded in the gameplay and the environment. At the beginning we don't set a clear long term objective, which will probably make you feel lost, just like a kid stranded in a mysterious island is supposed to feel. Little by little, some narrative elements will start to draw your attention, and you will start to put together the pieces of the narrative just as if it was another puzzle. The game has a literal story that you will understand once finished, but there are many, many layers of lore, and many interpretations derived from them, that will be reachable only to those willing to find all these pieces that are scattered through the environment, the collectibles and even the actions that you perform to solve some of the puzzles.

How long do you think it will take to complete the game? Does it lend itself to replayability?
(Kevin Sardà – Lead Designer) The duration of the game will largely depend on each player’s play style and how he or she would like to immerse into the exploration of the island and unlocking all the secrets it keeps. If if you really want to take your time and collect all the secrets, you might well end up in the 8-10 hours range , but it could take a couple hours fewer or a couple hours more. As for replayability, the story of RiME has a very well defined ending, which everybody will experience when they finish the game, but there is a good chance players might miss several secrets and collectibles in their first playthrough, and those items are not there as mere cosmetic additions or to artificially increase the time you spend in the game, but they offer deeper understanding about the story. We expect a good deal of players will revisit the island in order to get the whole picture!

What’s your target resolution and frame rate on PlayStation 4 and Xbox One?
(Carlos Vázquez – Lead Programmer) On PlayStation 4 and Xbox One the target resolution is 1080p at a minimum of 30 fps. We have surpassed that minimum specification in the best part of the game, but it is true that we have some specific points where, due to some technical challenges and the nature of our environments, have been a bit more complicated –but still maintain those 30 fps. On PS4 Pro we have achieved an even better frame rate, with an increase that ranges between 5 and 10 fps depending on the game's area.

Will the game support HDR (High Dynamic Range) technology and if so, on which platforms?
(Carlos Vázquez – Lead Programmer) The support of HDR that we have used on RiME is the one provided by Unreal Engine. We haven't had the need to change its default settings.

Are you going to use PS4 Pro's enhanced hardware to deliver graphical enhancements in RiME and if so, which ones?
(Carlos Vázquez – Lead Programmer) Sure, we are using the Pro's enhanced hardware. As commented before, we wanted a balance between having more frame rate than in a normal PS4 but adding some visual improvements that helped RiME to look even better. These improvements are, in short:
-          Much better quality of the shadows.
-          Temporal antialiasing has better quality, obtaining more definition and quality in the AA filter.
-          The LODs' distance has been tweaked to increase the visual quality of fauna and flora during the time they are rendered.
-          More definition in the texture filter.
-          The VFX, shaders, materials and translucency has better quality too so we can have, for example, more realistic metals, better screen space reflections and better detail level in general.

RiME is also coming out on the Switch. How is it to develop for the new console by Nintendo compared to other platforms? What's your opinion on the hybrid nature as portable/home console?
(Carlos Vázquez – Lead Programmer) The Nintendo Switch version of RiME is being developed by Tantalus Media, the Australian studio responsible for Zelda Twilight Princess HD. We are supervising the process, but our personal experience with Nintendo’s newest console is still somewhat limited at this moment.