Some very interesting information was revealed by Fudzilla.com today. They are one of those sources which are quite reliable but reveal information in bits and peaces. This particular example sees the reveal of information about Nvidia's Tegra Strategy - parts which we already knew and can be readily deduced, and parts which we did not. 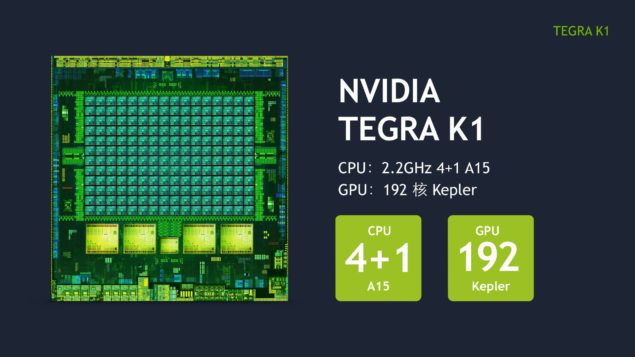 Not the Denver Variant.

One of the major problems that the Tegra 4i faced was the fact that it supported an A9 chip, which was mediocre at best. In the mobile market, GPU horsepower is not really of significant importance (except for a very small percentage) and the overall package will get more design wins any time of the day. One of the stronger suites of the Tegra 4i was LTE support but ofcourse, there were other well rounded competitors with LTE support as well. Meditek is growing to be one of the strongest competitors around and its market share growth has been simply phenomenal. Needless to say that it has been a major pain for other (mobile) chip manufacturers, fabless or otherwise.

Now this is where the story of Tegra K1 picks off. The new iteration of Tegra didn't only look at the GPU aspect but at the CPU aspect as well, which is one of the reasons it evolved into two variants. Now one of the best things to happen to Tegra K1 was the automotive industry, specifically the VCM and design wins there. Fudzilla very aptly compares the Automative side of Tegra K1 with the Quadro side of Nvidia's Mainstream Geforce DIvision. It is also just a matter of time before Tegra K1 64 makes it to mobiles. However there are currently two problems there. 1) There is literally no information on a Tegra 5i or Tegra K1i and 2) Because both variants of Tegra K1 use an Icera 500 Modem they can become pricey, which equates to competition getting an advantage.

One thing is absolutely certain however, this generation of Tegra will pave the way for the future of Nvidia's Mobile sector. There are reports of an Nvidia Tegra 64 based Shield Tablet and the Green has also gotten design wins for some Chinese tablets, but these next few months and the impact Nvidia makes are critical to the success of its mobile side.

NVIDIA: Nintendo Switch, Xbox and PS “Have Basically Similar Features” Which Allow Devs To Target A Much Larger Installed Base

If Nintendo NX Uses The Tegra X1, It Could Be Thought Of As “A Turbo Powered Last Gen Console”